Breaking Down Walls Of Hostility

"For he himself is our peace, who has made us both one and has broken down, in his flesh, the dividing wall of hostility." 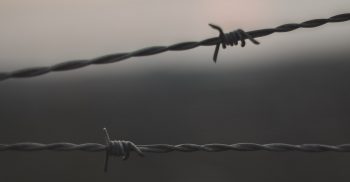 “For he himself is our peace, who has made us both one and has broken down, in his flesh, the dividing wall of hostility.”

These days we hear a lot about walls: walls that divide, walls that create hostility. We often see images of suffering people separated by a wall from a life of hope. These images have got the world thinking about our walls. They’ve got me thinking even about internal walls I might have built in my own heart.

We build walls for protection and for order.
We build physical walls and mental walls.

Worldly governments build walls–that’s what the governments of this world do; they pass laws and enforce them. But the Kingdom of God is not a government of this world. And according to Isaiah, the walls of the New Jerusalem are named “Salvation” (Isaiah 60:18).

It’s good to be thinking about our walls and what God might have us do with them. Paul talks about Jesus, in his flesh, breaking down the dividing wall of hostility. “But now in Christ Jesus, you who once were far off have been brought near by the blood of Christ. For he himself is our peace, who has made us both one and has broken down in his flesh the dividing wall of hostility.” — Ephesians 2:13-14

Some have argued that it refers to the curtain in the temple separating God from the people. That curtain is Christ’s flesh, according to Hebrews 10:20. And you’ll remember that as Christ’s body was broken, that curtain was ripped from top to bottom.

Some think it refers to the barrier between man and man, the dividing wall between the court of the Gentiles and the rest of the temple. Paul is probably writing to Ephesus from a prison cell in Rome, having been shipped to Rome from Jerusalem, where he was arrested upon suspicion of bringing Trophimus (a Gentile Ephesian) into the sanctuary and past the diving wall.

Do you remember, in the book of Joshua, what the commander of God’s army said to Joshua on the plains of Jericho when Joshua asked, “Are you for us or for our enemies?” The God-man said, “No.” And yet He was dressed for battle. What was He fighting? The walls. Israel didn’t tear down the walls; they worshipped Yahweh, and the walls came tumbling down.

I know the Old Testament is violent. But read it carefully and you’ll discover it is violence upon violence in the service of love. It is wrath, upon wrath; it is hostility, upon hostility.

Ephesians 2:15-22:
“…one new man in place of the two, so making peace, and might reconcile us both to God in one body through the cross, thereby killing the hostility. And he came and preached peace [He didn’t bargain for peace or threaten with peace; He proclaimed peace] to you who were far off and peace to those who were near. For through him we both have access in one Spirit to the Father. So then you are no longer strangers and aliens, but you are fellow citizens with the saints and members of the household of God, built on the foundation of the apostles and prophets, Christ Jesus himself being the cornerstone, in whom the whole structure, being joined together, grows into a holy temple in the Lord. In him you also are being built together into a dwelling place for God by the Spirit.”

One temple
One sanctuary
One dwelling place
One body
One bride
One people
One race
One man, one body, the Church.

The Church is that group of people who already believe Christ has united them in one body under one head. But in Ephesians 1:10, Paul told us that the plan for the fullness of time was to not only unite us but all things in Christ Jesus. And, you see, if in the eternal realm all things really are united in Christ Jesus, then ultimately in the final analysis—the final judgment—there really are no dividing walls of hostility. And I think they call that realm—that kingdom—Heaven.

And yet here in space and time, in an effort to maintain control, we erect dividing walls of hostility…in fear. We think those walls protect us. But maybe those walls enslave us. We think we’re building Heaven on earth, and we’re only enslaving ourselves in Hell.

Maybe that’s why He said, “If you want to be my disciple, pick up a cross.” It’s like the cross is a doorway to Heaven. And “the only place safe from the danger of love is Hell” (C. S. Lewis).

You know, I think Jesus was the first man (Adam) to walk through this world without dividing walls of hostility. And that’s why this world was so hostile toward Him. And yet that’s how He broke down the dividing wall and killed the hostility.

Are you starting to not like walls? Well, that’s a very good thing because part of you, part of His body, is on the other side of those walls and He is building you into a city whose “gates will never be shut.”

Scripture says, “For he himself is our peace, who has made us both one and has broken down in his flesh (his body) the dividing wall of hostility.”

Do you, His body, feel his hostility upon hostility stirring in you?
Is He stirring in you a heart of a city whose gates will never be shut?
Is He calling you to worship Yahweh so that the walls will come tumbling down?

Jesus said, “Take up your cross and follow me.”

This devotional was prepared by Kimberly Weynen.  It’s a compilation of excerpts from a sermon by Peter Hiett titled “Walls” and devotional thoughts from Kimberly. To dig into these things further, click on the link to read the whole transcript and/or watch the sermon: Walls