Battling Powers and Principalities of This Present Darkness 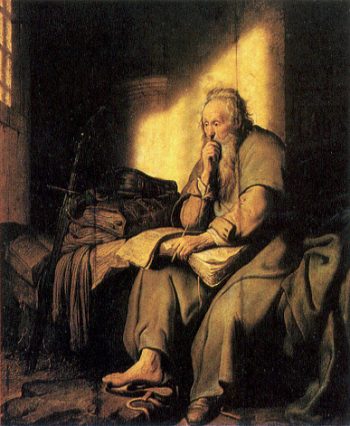 Paul sat in a jail cell somewhere, in chains that someone with flesh and blood wrapped around his ankles and locked with a key, then Paul wrote…

According to Paul, we’re in some sort of struggle or battle, and that’s kind of a relief because it does feel like we’re under attack, doesn’t it? We watch the news and see murder, rape, and crime on the outside, and we look at our own hearts and the hearts of others around us and we notice hatred, lust, and greed on the inside. It feels like we’re under attack on all sides; it can be overwhelming and so we often feel defensive and like we need some protection, some armor.

Now, when we imagine that armor, we probably picture something like Iron Man’s armor—something that we create, something that can cover us from head to toe, protect us from all the bad that surrounds us, including the “bad” people around us.

We try to construct armor (in all sorts of forms) to protect ourselves from evil—evil people. The only problem is, it doesn’t work. And Paul says, “It’s not people that we battle.” It seems Paul had different ideas—than we often do—about how to battle and put on armor. He seems confident that the enemy can be conquered even while he is in chains, writing from a prison cell and I bet he believed that we can battle the enemy even with something as simple as a piece of cloth.

Now, you might be thinking, “A piece of cloth? What are you talking about?” Well, let me explain: in Acts 19, we read that Paul arrived in Ephesus for the first time and found some disciples. Now, these disciples had never heard of the Holy Spirit so Paul baptized them in the name of Jesus, and they received the Holy Spirit (not a book or a program or just some information about Jesus or an instruction book about how to follow Him)…but a spirit…Christ’s Spirit.

Paul then reasoned in the synagogue for three months and two years, daily, in the Hall of Tyranus, and Scripture records that all the residents of Asia Minor heard the Word of the Lord:

“And God was doing extraordinary miracles by the hands of Paul, so that even handkerchiefs or aprons that had touched his skin were carried away to the sick, and their diseases left them and the evil spirits came out of them.”  —Acts 19:11-12

Did you catch that? Demons were cast out and the sick were healed by means of these pieces of fabric. I think Paul was battling against powers and principalities of this present darkness and God was using something as simple as a piece of cloth. And we “modern,” “enlightened” people want to say, “Get real! You can’t battle anything with something so simple. You need tanks, and bombs, and policies and procedures. That’s not the real world. That can’t happen!” But maybe it happens more often than we think, and people are doing battle Jesus-style and Paul-style all around us, and we don’t even notice.

Here’s an example: several years ago, I read about a criminal that broke into a curio shop in Colorado. As he was taking the money and snatching up valuables, he noticed a photo on the wall. It was so powerful that he put all the money and the stolen goods back. Then he wrote an apology letter, leaving it on the counter for the owner of the store to see the next day.

Just think about that! What the US military, the government of Colorado, and the Denver Police department could not do . . . this photo on the wall did do. Well, maybe it wasn’t just the photo but the Spirit behind the photo.

The photo that thief saw was a photo of Blinky the clown. The thief had realized that the entire curio shop belonged to Russel Scott, whom every kid in Colorado used to know as “Blinky the Clown.” He daily entertained children on his show Blinky’s Fun Club. During each show he sang the “Happy Birthday” song to children who were celebrating their birthdays, and he would always sing: “Happy Birf-a-day to you.”

Well this thief, suddenly, realized that everything he took had been touched by Blinky. Suddenly, he was a child, and whatever voices had been telling him, “Take, take, take,” were silenced, and another Spirit said, “Give, give, give.” He put all the goods back and wrote an apology. It said, “I sat on your lap when I was five years old. I couldn’t rob you; you sang ‘Happy Birf-a-day’ to me.”

Deep called to deep. Spirit touched spirit, and that Spirit spoke to him from every particle of man in the curio shop—and especially through a simple photo. I think the Spirit of God said, “Happy Birthday. I see you, and I observe you. I know you; I love you,” and it stopped a thief dead in his tracks.

Now that’s powerful!
Jesus said, “You will receive power when the Holy Spirit comes on you.”
That’s the power of Love, for God is Love!

And when the powers of this world see power they want it. They want to seize it, grab hold of it, and use it for there own personal gain. That’s exactly what happened when word spread about the work that God was going through Paul. In Acts 19 we read:

Then some of the itinerant Jewish exorcists undertook to invoke the name of the Lord Jesus over those who had evil spirits, saying, “I adjure you by the Jesus whom Paul proclaims.” Seven sons of a Jewish high priest named Sceva were doing this. —Acts 19:13

These itinerant Jewish exorcists and magicians saw that there was power in the name of Jesus, and so they decided to use the name of Jesus (almost like a magic potion). They were magicians. They thought they could gain power and conquer with their own knowledge but in the end, it was only the power of Love that conquered the hearts of many and set them free [See Acts 19:13-20].

The great anthropologist, Bronislav Malenowski defined magic this way: “Magic is a system through which people try to get gods to conform to their own will.”

And that’s very different than biblical faith, isn’t it?

Faith is trust in a Person.

Magic is using knowledge to control a person.

I wonder how many of us, rather than trusting in the Person of Jesus, try to use our knowledge of Him to try to control Him so that we can gain power, so that we can construct armor for ourselves in an attempt to protect ourselves from the people around us.

Saint Paul wrote, “We wrestle.” And we do wrestle and struggle don’t we? We think it’s against people but Paul says, “No, it’s not; it’s against the spiritual hosts of wickedness in heavenly places. We all battle them.

The enemy whispers, “Take, take, take. Be afraid, for if you don’t take, you will die!” But Jesus—the Life, gives us His life and says, “This is my body and blood [my life] given for you!” And He shows us the path to true life saying, “Deny yourself, take up your cross and follow me.” “Whoever wants to save their life will lose it, but whoever loses their life for me will find it.” (Matt. 16:24b-25)

True armor is Jesus Christ and Him crucified AND risen from the dead!

Paul wrote, “Put on the Lord Jesus Christ.” “Have the same mind that was in Christ Jesus who emptied himself, by taking the form of a servant being born in the likeness of men. And being found in human form, he humbled himself by becoming obedient to the point of death, even death on a cross”

He is the truth, with which we gird our loins.
He is the righteousness that covers your heart.
He is the peace in which we walk.
He is the faith that we exercise against evil.
He is our salvation; we have the mind of Christ.
He is the Word of God, living and active–the Sword we wield.

It was on the cross that God “disarmed the principalities and powers and triumphed over them in Jesus, raising Him from the dead and raising us in Him, hidden in Him.” (Col 2:13-15

So let’s go to battle! Surrender your earthly armor, confess your sins, surrender your shame to the One who loves you with an unending and unstoppable love.  He says, “Happy Birf-a-day to you; I see you; I know you, and I love you.”

“He too shared in [our] humanity so that by his death he might break the power of him who holds the power of death—that is, the devil— and free those who all their lives were held in slavery by their fear of death.”—Heb. 2:14b-15

Discussion questions are available here: Discussion Questions “Get Real A What or a Who“