Becoming Who You Already Are 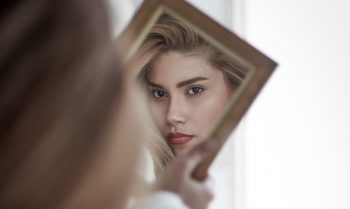 In the Sci-fi novel, Perelandra, by C.S. Lewis, the devil (in the body of the Un-man) tempts the brand new Eve on the new planet Venus. She is beautiful, naked, green, and deeply happy until the devil holds up a mirror.
Lewis writes:

“Oh–oh,” she cried. “What is it? I saw a face.” “Only your own face, beautiful one,” said the Un-man. “I know,” said the Lady, still averting her eyes from the mirror. “My face–out there–looking at me…I feel my heart is beating too hard. I am not warm. What is it?”

That Truth, That Love, That Life in us would be God alive in us, Eternity in me, and that me, would be Eternal, which means, that “me” would not be stuck in time or be conditioned by time but would condition time, like an idea in a Creator’s mind conditions how the idea is created in time.

Perhaps there is an Eternal Me in all of us and that Me is “in Christ.” The New Man is a New Me, and the New Man is Jesus. And that New Man is Eternal.

In Ephesians 1:4 Paul wrote: “God chose us in Him before the foundation of the cosmos.” So, maybe you’re being made and revealed in time and yet you already exist in Eternity. Paul wants you to believe that. Listen to what he says in Ephesians: You were chosen in Christ before the foundation of space and time (Ephesians 1:4). And although “you were dead” in space and time (Eph. 2:1) “you are seated in the heavenly places with God in Christ” (Eph. 2:6). “You are his masterpiece, created in Christ Jesus for good works, which God prepared beforehand that you would walk in them (Eph. 2:10). So, although you have an “old self,” (Eph. 4:22) you also have a “New Self,” (Eph. 4:24) a New Man “already created in righteousness and holiness,” the perfect image of the invisible God.

It’s imperative that you believe that He, the New Man is already created . . . so that you stop creating the old man by trying to create the New Man.

It’s imperative that you believe He already exists…so that you can take the old man off and put the new man on.

If you feel like an empty earthen vessel or a vessel full of yourself, longing to be filled with Him . . . Paul is not saying this might happen. He is saying this has already happened and must happen in time.

In Romans, Paul goes on to say it this way: “We know that our old self was crucified with him in order that the body of sin might be brought to nothing, so that we would no longer be enslaved to sin…so you also must consider yourselves dead to sin and alive to Christ Jesus” (Romans 6:6 and 6:11 )

Once you see it’s a corpse, you get rid of the corpse.

Do you see? The Word is a mirror but not just a dead mirror; it’s a living mirror that exposes death and implants life. Receive His Life . . . and know Him as a person . . . commune with Life and give birth to Life. James refers to the law as a mirror: We look in the law and see our own face, “But the one who looks into the perfect law, the law of love and perseveres,” writes James, “being no hearer who forgets but a doer who acts and is blessed in his doing.” When we come to the cross and see Jesus has died, we see… that Jesus is the Good. And when we persevere at the cross and we see Jesus has risen, we look in His eyes and see God is Good and God has made us Good–He’s given us His Life.