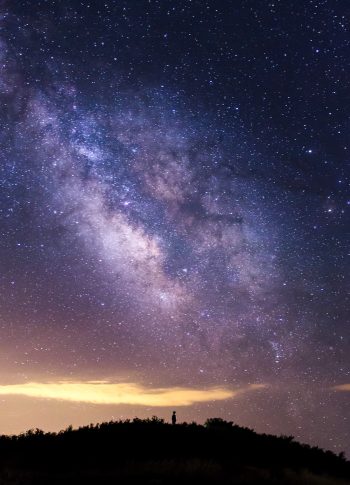 Do you believe that you ALREADY have been blessed and chosen in Christ BEFORE the foundation of the cosmos?

Do you believe that God the Father has blessed and chosen you and there’s no “if” about it? Not He WILL bless you… He WILL choose you…. IF…. But He already has done it?

For many of us, that’s just mind-blowing and contrary to what we’ve heard and believed. But Paul says we were chosen and blessed in Christ even BEFORE the foundation of the cosmos!

I’d like us to think about space and time for a moment. In 1884 a pastor and schoolteacher named Edwin Abbott published a little book entitled Flatland. Flatland is about two-dimensional creatures that live in peace in a two-dimensional world called Flatland until one of the characters has a revelation of the third dimension and tries to explain it to the citizens of Flatland.

Paul, who wrote the book of Ephesians, spoke of being “caught up into the third heaven” and hearing things he was “unable to speak.”

Well, like Paul, this Flatlander sees things he cannot explain, not because they are untrue but because they are truer than what a two-dimensional mind can comprehend. The two-dimensional mind thinks the third dimension is just a metaphor or myth, so when the Flatlander with the revelation insists, “It’s real!” he’s ruled a heretic and thrown in prison, just like Paul.

You see, if we lived in Flatland, our world, our cosmos, would look like a large, white board with two-dimensional circles, squares, and rectangles drawn on it. And the only things we could perceive would be two-dimensional objects like squares and circles.

But what would we see if a three-dimensional sphere suddenly intersected our world? We’d see a miracle, a sign, or a wonder. Suddenly a dot would appear, grow into a circle, shrink, and disappear.

What would we see if a cylinder intersected our world with the rectangular side facing us? A rectangle. What would we see if the same cylinder intersected our world with the circle facing us? A circle. What if the guy with the revelation said, “The rectangle is the circle; what you see is two yet one”? We’d all say, “You’re insane!” What if he said, “It’s three in one—a rectangle, circle, and cylinder.”

Well, what if cylinders, cones, and spheres intersected Flatland all the time and just stayed there? We Flatlanders would be surrounded by miracles, signs, and wonders all the time and wouldn’t even know it.

Maybe we really have been “blessed with every spiritual blessing in the heavenly places” and we just don’t see it or know it!

Maybe we need “the eyes of our hearts enlightened,” as Paul put it, in order to see that “we HAVE BEEN blessed in Christ with every spiritual blessing in the heavenly places.”

Maybe you yourself are one of those blessings, already seated with Christ in the heavenly places.

Maybe we look in a two-dimensional mirror, in just a moment in time, and say, “I see a failure. I see someone that is cursed. I see a beaten, naked man who deserves to be crucified.” But the man with the revelation says, “No. You are God’s masterpiece created in Christ Jesus for good works, which God prepared beforehand that you should walk in them” (Ephesians 2:10).

Maybe we only see one page of a great story. Or we only see our choices and don’t yet see God’s choice, God’s eternal choice that transforms all our temporal choices and fills our empty selves with meaning.

Well, whatever the case, most Evangelical Christians think it’s not the sum total of all your choices that gets you to Heaven. You really only have to make one choice, and that overrides all other choices. Of course, that choice is to choose Jesus.

The only problem with that idea is that Jesus said, “You didn’t choose me; I chose you.” And “apart from me, you can do nothing.” And according to Scripture, that is exactly what we choose—nothing. We choose a lie, darkness, death, and outer darkness. Our choice is a lie and an illusion, and so with our choice, we create Hell and put flesh on the devil.

It’s important to realize that salvation isn’t being saved BY our choices; we’re saved FROM our choices. In Biblical language, we’re saved from our sin.

Apart from Christ, we can do nothing. And only in Christ can we do something. Only by the grace of God can we make a good choice. So we didn’t choose Him, and yet He chose us to make good choices, or at least “walk in them.”

Paul wrote, “Christ will fill all things.” In fact, Ephesians 1:22 says, “We are His body, the fullness of Him who fills all in all.” We say, “Nice metaphor, Paul.” And he shakes his head in frustration because it’s not a metaphor.

That means before space existed and before time began in a realm where words like “before” no longer work, in a realm where human language breaks down, God saw all of you, every choice, every sin, every decision, every flaw for which He would bleed and then fill with grace. He saw it all, and He made a choice. He spoke Word, and it all sprang into existence. Not just foreseen but predestined, for He is the Creator, even of time.

You see?
There is one choice that matters.
There is one will that is entirely free, and it’s not yours.
It’s God’s will, God’s Word, God’s choice, God’s blessing.

In other words, “You TRULY have ALREADY been blessed in Christ Jesus with every spiritual blessing in the heavenly places,” even as He “chose you in Christ from the foundation of the world.”
The decision…
The judgment…
The choice…
The election of God…
Is finished.

Children of God, your Father has blessed you, and there is no “if”…. All of our decisions, all of our “ifs” exist within God’s decision, God’s “if,” a decision decided before the world began and revealed on the tree, as Jesus Christ called out, “It is finished.”

This devotional was prepared by Kimberly Weynen, Peter Hiett’s assistant. It is primarily a compilation of excerpts from the sermon entitled “If” from our series in Ephesians. This devotional might have raised questions about free will, faith, how God reconciles us and the entire world to Himself and maybe more. You can dig deeper into these things by exploring our Ephesians sermon series here: https://relentless-love.org/sermons/page/5/?filter-by=series&filter-term=ephesians%2F or go to https://relentless-love.org/sermons/if/  to read, watch or listen to the sermon “If.”