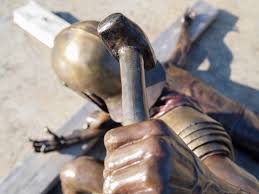 Would you have crucified Christ?
Do you ever think that because you’ve been good you deserve something? Have you ever thought that, because you had faith, you deserved something, as if you created faith and so could bargain with faith and purchase your salvation?

In Matthew 21, Jesus tells a parable about the master of a vineyard who sent his servants to get fruit during the proper season, but the tenants beat, kill, and stone them. He then sends his son saying, “They will respect my son.” But when the tenants saw the son, they said to themselves, “This is the heir. Come, let us kill him and have his inheritance.” And they took him and threw him out of the vineyard and killed him…

Not long after Jesus spoke these very words, the religious folks in Israel, who supposedly delighted in the Christ, delivered the Christ to the Romans so that they could take His life. The Lord, whom they sought, came to His temple. And the Christ awaiters–the “Christians,” if you will, killed him. And He let them.

In fact, in Matthew 21:42 we read: “This was the LORD’s doing.” Wow! That is so unexpected, it ought to shake each of us right down to the core and make us ask this question: “If I would have been there that day, would I have crucified the Christ?”

Well, are you a tax collector or a prostitute? If so, maybe not.
But if you call yourself a Christian, if you’re a religious person like me, maybe so.

Who was it that crucified the Christ—that committed the greatest evil in history? Was it a raging band of tax collectors and harlots–or someone else? Tax collectors and prostitutes use people, and so, turn people into things, and then those people die to them, for things can’t love. They don’t love Love, They use Love… and Love dies. But when Love in the Flesh came to them, they recognized their sin and repented. They saw their sin and surrendered to Grace–they believed in God’s Word of Love–Jesus.

Religious folks often use God and turn Him into their thing–in order to get His things–His power. They use God, the way tax collectors and prostitutes use people, but they have a hard time seeing how they use God because they use knowledge of God to hide from God and justify themselves before God. They use knowledge of the Good, to hide from the Good and justify themselves before the Good.

When Love comes to you– to your temple, do you ever turn Him into law? Then do you use the law to hide yourself and justify yourself?

When you reduce Love to a law maybe you crucify Love.

Well, it shouldn’t surprise us that when Truth in Love Himself came to His temple, it was the religious folks that nailed Him to a tree in a garden. They killed Him.

Jesus said, “I am the vine, you are the branches, abide in me that you may bear much fruit.” All Fruit in you comes from the Life in the Vine. All Fruit is the Fruit of God’s Mercy, not of your own doing.

Do you get the picture? The Good in you is the Life of Christ in you. He said, “I am the Life.” When you call your life, “my life,” and claim the fruit as your own: Aren’t you taking the Son’s inheritance as your own? And aren’t you taking His life as your own? As if He were fruit hanging on a tree in a Garden somewhere, and you just took it?

You can’t earn anything, for you have nothing to earn it with. You see a self-righteous, religious person is a crook and a harlot, except that they’ve convinced themselves they’re not. They believe that they are their own creator and savior. They think, “I am Salvation,” rather than “God is Salvation,” so when Jesus comes to their temple they’re threatened and jealous and take His life on the tree.

But: “The law came in to increase the trespass” writes Paul, “but where sin increased, grace abounded all the more.” And it was all according to His Plan—For we are His Bride and He is our Groom… and from the foundation of the world, from first to last, He has longed to show us the depths of His Love, so we would trust Him, who is Love, and surrender to Love, filled with Love, bearing the fruit of Love.

So, to enter the Kingdom: You must admit that you are an old harlot and that your righteous deeds were an act. You must die to the harlot and die to the act. And that will only happen when you see that Christ Jesus has already made you His Bride.

He’s told you: Maybe you just haven’t believed Him.

We’ve all twisted the truth, used love, and taken His life as our own. We’re all conmen, crooks, and harlots. We’ve delivered Him up to death time and time again. And He let’s us break His body. But, even when betrayed, He breaks the bread and says, “This is my body given to you. Take and eat. This cup is the covenant in my blood. [It’s a marriage covenant.] Drink of it all of you.”

Now think on the Fruit.
Drink the fullness of His goodness.
Just see Him, and you will worship Him.
Worship Him, abide in Him, and let Him grow His fruit in you.

This devotional was prepared by Peter’s assistant, Kimberly Weynen. To dig into these things further, click on the link to read the whole transcript and/or watch the sermon: Jesus Envy (Christians Who Crucify Christ)