You Couldn't Be More Loved 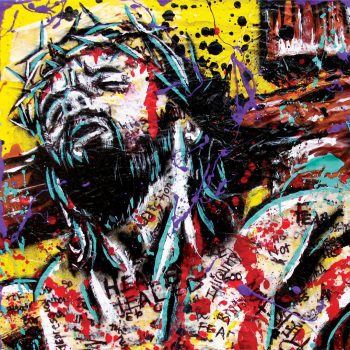 One who was chosen, naked, bound hand-and-foot and cast into the outer darkness that all might know Love!

In Matthew 22, Jesus tells a parable where He likens the kingdom of heaven to a king who gave a wedding feast for his son. The king has a tough time getting people to come; he gets really angry and has some of them destroyed, and finally, he sends his servants into the roads to gather everyone they can find, both bad and good, until the wedding hall is filled with guests: “But when the king came in to look at the guests, he saw there a man who had no wedding garment. And he said to him, ‘Friend, how did you get in here without a wedding garment?’ And he was speechless. Then the king said to the attendants, ‘Bind him hand and foot and cast him into the outer darkness. In that place, there will be weeping and gnashing of teeth.’ For many are called, but few are chosen.”

Well, that’s a tough passage! And it raises lots of questions, especially about the guy that gets bound up and thrown into outer darkness for violating the dress code. So let’s ask just a few here, and if you have more check out the sermon link at the end.
Who is that one guy?
How did he get into the banquet hall?
Why didn’t he answer the king’s question?
What’s with the wedding garments?

Well, at the end of the passage, Jesus says, “For many are called, but few are chosen.” Maybe thinking through that statement might bring some insight: The “few” cannot be the beggars and bag ladies in the banquet hall because those people fill the hall. That’s not few, that’s many. And it can’t be the people that didn’t go to the banquet because that’s many and not few. It can’t be those that the king lost or destroyed for that also was many and not few. In the story, all are called and one is chosen.

There is one chosen by the king to be cast into outer darkness.
There is one the king calls “friend.”
There is one that didn’t answer the king’s question.
Listen to this, there is one that opens not his mouth. To quote Isaiah 53: “Like a lamb that is led to the slaughter and a sheep before its shearers is silent so he opened not his mouth.” Verse 6: “The Lord has laid on him the iniquity of us all” (That’s the unrighteousness of us all). Verse 11: “Through him the Lord makes many the accounted righteous.”

Maybe it’s that One! Maybe He didn’t get into the banquet hall because He had always been in the banquet hall. Maybe He had no wedding garment because He had given His garments to those who had none, clothing them in righteousness. Maybe the one that is chosen is the Son of the King–the bridegroom, and maybe the many that are called are His Bride–us. Now that’s a wedding banquet!

And maybe He is called “friend,” which is also translated comrade or co-worker because He is working out a plan with the His father. Jesus said, “No one takes my life from me, but I lay it down of my own accord.”

In just four days from when this parable was told, at the feast, the Passover Feast, the people of Israel whom God had called a harlot and a bride, stripped Jesus, flogged Jesus, and mocked Him as king. They marched Him to the edge of the city on Mount Zion where they bound His hands and feet just like the man in Jesus’ story. They bound him–hands and feet–with leather and nails to a tree in a garden, outside the city, on the slopes of Mount Zion; they crucified Him naked.

All four Gospels make a big deal of this: the soldiers that crucify Him divide His garments between them casting lots for His tunic. Then and there, at the main road–at the gate of the city, as the Son of the King–the chosen one–hung on the tree, the sky grew black from noon to three. It was outer darkness. At 3 p.m. Jesus cried out, “My God, my God, why have you forsaken me?

That’s the first line of Psalm 22. Every Jew would know Jesus was singing or quoting Psalm 22. This is verse 18: “They divide my garments between them and for my clothing they cast lots.” Verse 24: “The Lord has not hidden his face from him but has heard when he cried.” I don’t think God forsook Jesus, but I know that Jesus felt forsaken, for Jesus was dressed in our unrighteousness.

Like Paul wrote, “God made him to be sin, who knew no sin, so that in him, we might become the righteousness of God”—dressed in Him and He dressed in us.

Well, then the naked Son of the King, hanging on the tree in the garden, in outer darkness, outside the city quotes Psalm 22. He cries out, “It is finished, and delivers up His Spirit.” The curtain in the temple rips. The tombs are opened. And seeing this, Matthew 27: 54, the soldiers that crucified Him, that now wear His garments, are the first to confess, “Truly this was the Son of Man the Son of the King.”

Do you see it? God is love, and that’s what’s served at the banquet: body broken, blood shed, bread and wine, and Passover Lamb–the Love of God broken and poured out. It creates faith and so creates us. It clothes us with the righteousness of Christ and makes us who we really are–the Bride of Christ!

God the Father and God the Son conspired and freely chose to love you that you might surrender to Love, and you too might love, and share their joy. You couldn’t be more loved!

This devotional was prepared by Peter’s assistant Kimberly Weynen.
To dig into these things further, click on the link to read the whole transcript and/or watch the sermon: