Easter According to Saint Paul 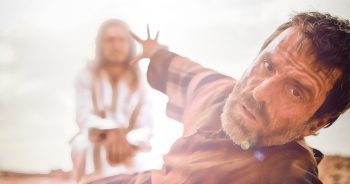 One year, around Easter, I began wondering: “What did Easter mean for Paul?” And then I realized that Easter actually happened to Paul like it happened to the other Apostles. In 1 Corinthians 15, Paul recounts all of Jesus’ resurrection appearances and then he writes, “Last of all, as to one untimely born he appeared also to me.”

When I think about Paul’s conversion experience, there is something I find utterly fascinating about it: Easter didn’t make Paul more religious; it made him far less religious. And Paul, or as he was known at the time, Saul, had been very religious.

Saul’s religion was Law— taking knowledge of good and evil. Saul was a Pharisee of Pharisees. He believed he could make himself in the image of God and make Israel (his church) into the people of God. He thought he could build Jerusalem and keep it safe from heretics like the followers of Jesus.

Even as a young man, he was notorious for his zeal in defending his religion. In fact, he was there when Stephen (the very first martyr) was stoned to death by a religious mob. Bystanders said that Stephen’s face glowed like that of an angel, but Saul evidently ignored the light and grew even more violent.

Saul believed there would be a judgment and that he knew the judgment and so he could help Judge. And Saul firmly believed in the Messiah and hoped for the Messiah; he knew all about the Messiah. Actually, it was with his knowledge of the Messiah that he had judged Jesus and rejected Jesus… And now sought to kill Jesus’ followers.

But then . . . look at what happened! Here’s an account from Acts 9. It’s the account of Easter for Saul:

“But Saul, still breathing threats and murder against the disciples of the Lord, went to the high priest and asked him for letters to the synagogues at Damascus, so that if he found any belonging to the Way, men or women, he might bring them bound to Jerusalem. Now as he went on his way, he approached Damascus, and suddenly a light from heaven flashed around him. And falling to the ground he heard a voice saying to him, ‘Saul, Saul, why are you persecuting me?’ And he said, ‘Who are you, Lord? And he said, ‘I am Jesus, whom you are persecuting. But rise and enter the city, and you will be told what you are to do.’ The men who were traveling with him stood speechless, hearing the voice but seeing no one. Saul rose from the ground, and although his eyes were opened, he saw nothing. So they led him by the hand and brought him into Damascus. And for three days he was without sight, and neither ate nor drank.”

Like three days that Jesus, the Son of Man (Matthew 12:10) was in the “heart of the earth. Easter! “His eyes were opened” and yet physiologically “he saw nothing.” He was blinded and yet, he saw the Light.

Paul was cornered, exposed, and undone by Jesus on Easter.

“And for three days he was without sight, and neither ate nor drank. Now there was a disciple at Damascus named Ananias.” [The name “Ananias” means, “when God has graciously given.” Ananias would have been one of those that Paul would have drug to Jerusalem to be tried and murdered.]

The Lord said to him in a vision, “Ananias.” And he said, “Here I am, Lord.” And the Lord said to him, “Rise and go to the street called Straight, and at the house of Judas look for a man of Tarsus named Saul…”

Saul had been like king Saul, he had seized control of God’s kingdom and betrayed the son of David.

It’s no accident that Jesus says, “You’ll find him in the place of Judas.” Judas seized control and hung himself on a tree before he could see that Jesus hung on the tree in his place. We don’t know exactly what happened to Judas after that but Jesus loved Judas and Judas was one of the 12, and it appears that Saul was God’s choice to take Judas’s place…Saul is a Judas that lost his religion on Easter when he saw that he was saved and sanctified by grace “at the house of Judas.”

And God sent a messenger of His grace to Saul. He said to Ananias:

“‘…look for a man of Tarsus named Saul, for behold, he is praying, and he has seen in a vision a man named Ananias come in and lay his hands on him so that he might regain his sight.’ But Ananias answered, ‘Lord, I have heard from many about this man, how much evil he has done to your saints at Jerusalem. And here he has authority from the chief priests to bind all who call on your name.’ But the Lord said to him, ‘Go, for he is a chosen instrument of mine to carry my name before the Gentiles and kings and the children of Israel. For I will show him how much he must suffer for the sake of my name.'”

And what is the name for which Paul will suffer? The name is Jesus. It literally means “God is salvation.” Paul’s religion had been “I am salvation”–the religion of me. God told Ananias, “He must suffer for the sake of my name.” Suffering is the loss of control, and here’s the truly beautiful thing: Saint Paul would one day actually long to suffer just to be with Jesus.

“So Ananias departed and entered the house. And laying his hands on him he said, ‘Brother Saul, the Lord Jesus, who appeared to you on the road by which you came has sent me so that you may regain your sight and be filled with the Holy Spirit.’ And immediately, something like scales fell from his eyes, and he regained his sight. Then he rose and was baptized, and taking food, he was strengthened.”

And then . . . do you know what happened? Paul then proceeded to preach the gospel and raise the dead. He was repeatedly beaten, flogged, and imprisoned. He wrote a large portion of the Bible and had a huge impact on the world. But on Easter (Paul’s Easter) he lost his religion, perhaps all religion; Paul lost Saul, he lost himself.

He was chosen at his worst, a son of perdition–a Judas–actually worse than Judas (according to scripture he was “chief among sinners”, and God turned him into history’s greatest saint.

So, listen to God’s Judgment on Paul and His Judgment on us: We will each be cornered, trapped in the spotlight of Christ’s glorious presence. And we will see that we have not chosen the Good–rather, the Good chose us. We will each have to stand in the Light of His furious Love and realize there is not one thing we can do that could make Him love us more or make Him love us less.

Young Rabbi Saul was a religious zealot.
Old Saint Paul was a lovesick fool.
He had lost his religion and gained Christ:

“…circumcised on the eighth day, of the people of Israel, of the tribe of Benjamin, a Hebrew of Hebrews; as to the law, a Pharisee; as to zeal, a persecutor of the church; as to righteousness under the law, blameless. But whatever gain I had, I counted as loss for the sake of Christ. Indeed, I count everything as loss because of the surpassing worth of knowing Christ Jesus my Lord. For his sake I have suffered the loss of all things and count them as loss [crap], in order that I may gain Christ and be found in him, not having a righteousness of my own that comes from the law, but that which comes through faith in Christ [the faith of Christ]…” —Philippians 3:5-9

This devotional was prepared by Kimberly Weynen, Peter Hiett’s assistant. It’s primarily a compilation of excerpts from Peter’s sermon entitled “Losing My Religion.” To read, watch or listen to the sermon in its entirety click here: Losing My Religion