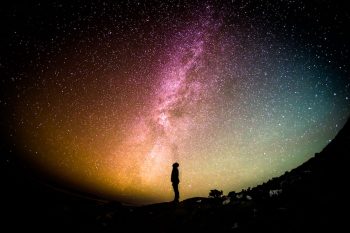 What’s the big deal about Easter? And why does it matter? We know it’s the day that we celebrate Jesus’ resurrection from the grave. And yet, that’s only one guy, rising from one tomb, at one moment long ago.

Imagine a timeline stretching from the beginning of time until now. If the world is between 10,000 and 15 billion years old (depending on what you believe), then isn’t Easter just one moment at the end of the line?

Jesus came out of the grave, but everybody still dies and every moment dies. It’s like Paul writes in 2 Corinthians 4:11 – “While we live we are always being given up to death.” To live in time is to constantly die … every moment dies.

So I thought: “Let’s ask John why this is a big deal!” It appears that John was the only disciple who went to the cross and watched Jesus die. And John was the first to believe. John had the most profound resurrection experience of all the disciples.

Well …
#1. His Best Friend
A world of good moments. John called himself “The disciple that Jesus loved,” not because Jesus didn’t love others, but because the love of Jesus was his world–his best friend.

#3. The Light of the World (John 1:8-9)
I don’t think John meant it as a metaphor.
When Jesus was crucified, a great darkness covered the earth.
When Jesus died, the Light died.

He is above, below, before, after, and all around our mental time line. He said, “I am the Beginning and the End.” He is Light, and His movement in this world defines time. So when Jesus died, time died. Or perhaps, “It is finished.” Time is finished.

All things… all space is sustained by God’s Word. So when the Word died, all space died. Darkness covered the earth, and the earth shook.

Physicists now say that all space and matter are like vibrations of meaning on superstrings … like words. Word is “Logos,” which means “Reason, Logic, Meaning … the Plot.” The Plot died. The meaning of all things, and the meaning in all things died when Jesus died. So, when Jesus died …

#5. John’s Home died.
That is, the meaning, light, and life in every moment died. And John’s home, Jerusalem, quite literally died, as Jesus said it would. By the end of the 1st century, when John wrote the Gospel and the Revelation, he had witnessed the fall of Jerusalem and the destruction of the temple. His home died.

#6. John died.
Everything John had worked for … all “the Good” in his life.

John clearly thought that he would rule with Jesus from Jerusalem in a newly-constituted kingdom that would defeat Rome … and that’s why his mother asked Jesus to let her son John sit at His right hand. And that’s why John once asked Jesus if he could call down fire from Heaven on an entire Samaritan town. And that must be why Jesus nicknamed John “Boanerges” – Son of Thunder. When John first met Jesus, John was a very violent man. But when Jesus died; John died.

#7. Everything died.
Scripture tells us that the devil keeps us in “lifelong bondage…through the fear of death …” It’s not just death on the last day of your life; it’s death every moment of your life.

When John saw Jesus die, he saw EVERYTHING go into that tomb.

BUT when John saw Jesus rise, what did he see come out of that tomb?

When He died on the cross, He cried, “It is finished!” And John comments, “All was finished … telestai … accomplished.” Not like all moments were over, but all moments had reached their perfection and purpose … eternally new.

John saw all time enter that tomb, and all time come out. So Easter is always happening!

#4. The Word that upholds all things, risen from the dead. So Easter is everywhere – even the places that seem like nowhere. Places like Sheol.

#5. His True Home
Perhaps the greatest of all resurrection appearances was when Christ appeared to John, exiled on the island of Patmos. By that time, John had seen just about everything die, and Jerusalem destroyed. Jesus appears to John, blazing with Glory, and John falls as though dead until Jesus touches him, saying “Don’t be afraid John … it’s me.” To John He reveals the meaning of space and time (which is Himself).

Then, in Revelation chapter 21:1, we read this:

“Then I saw a new heaven and a new earth (that’s everywhere that’s anywhere); for the first heaven and the first earth had passed away, and the sea was no more. And I saw the holy city, new Jerusalem, coming down out of heaven from God, prepared as a bride adorned for her husband (The old made forever new. John’s home made forever new. It’s the form of Old Jerusalem made by people and the work of their hands (tabernacle), but it’s the New Jerusalem, made by God and the work of His hands.); and I heard a loud voice from the throne saying, “Behold, the dwelling of God is with men. He will dwell with them, and they shall be his people, and God himself will be with them; he will wipe away every tear from their eyes, and death shall be no more (there is no “endless death”), neither shall there be mourning nor crying nor pain any more, for the former things have passed away.”

#6. His True Self –John saw John – A new John built into a city. A city, a temple – God’s home.We can go home, and God can go home. We are God’s home.
We build our cities in faithlessness and fear, and the whole time God is building His city with faithfulness and love. He’s building us.

Originally, John thought he built the city, so he shut the gates and made the walls thick to guard the good, and he went to war, full of violence – The Son of Thunder. But Jesus revealed that God built the city, and the city was John – the True John was a gift of Grace. So he was full of grace, and the gates were always open, and so the Son of Thunder became the Apostle of Love. That’s real thunder!!

#7. On the Island of Patmos, John saw all things … filled with Love. And He wrote, “GOD IS LOVE” … and that’s thunder.

You see, when we think Easter is small – just one guy at one time at one place on the other side of the world – we think Love is small, and we think redemption is small, and the Redeemer is small. So we think we must be our own redeemer. So we take the good and guard the good as our own good. We build walled cities that become prisons, and then we go to war. We create hell, and trap ourselves in that hell.

But when Easter is big, our hearts are big as heaven!

He takes all my old things and makes them eternally new. I surrender all the good moments in gratitude (they’re His), and I don’t have to fear or hang on … and He gives them all back.

We surrender our broken moments, and with them God builds the New Creation.

“He is…the firstborn over all creation. For in him all things were created: things in heaven and on earth, visible and invisible, whether thrones or powers or rulers or authorities; all things have been created through him and for him. He is before all things, and in him all things hold together. And he is the head of the body, the church; he is the beginning and the firstborn from among the dead, so that in everything he might have the supremacy. For God was pleased to have all his fullness dwell in him, and through him to reconcile to himself all things, whether things on earth or things in heaven, by making peace through his blood, shed on the cross” (Colossians 1:15-20).

This devotional was prepared by Kimberly Weynen, Peter Hiett’s assistant. It is a compilation of excerpts from the sermon titled “How Big is Easter?” You can watch, listen to or read the full sermon here: How Big Is Easter?