Does God Care About Your Sex Life? 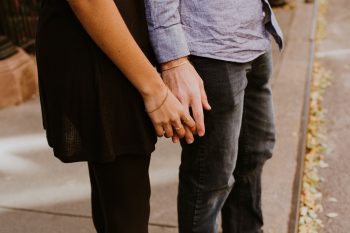 Sexuality is a constant topic in the Bible. It’s often translated into obscurity, but concepts like seed, fruit, communion, even “knowledge” are very sexual concepts in Scripture. God’s first commandment was: “Be fruitful and multiply.”

In the Old Testament, the sign of the covenant was circumcision. I’m sure Abraham thought: “Gosh, couldn’t we think of a better sign? God, you want to touch me there? I mean if you touch me there it’s like touching my heart! Could we talk about something else? This topic makes me feel uncomfortable.”

God seems to be very concerned with your sexuality.

And I’m convinced that He’d really like you to talk to Him about any and all sexual issues. But we have such a difficult time doing that. It’s ironic, we live in a very promiscuous society and yet an extremely repressed society. Sex is everywhere, but it’s very difficult to talk about what it means.

In a Hebrew agrarian society, it must’ve been just about the opposite: Everyone knew what sex was, how it worked and even what it meant. Every little kid grew up watching the animals on the farm. They knew where baby sheep and goats come from. They knew how life was produced. And they knew that when it came to people, the process was sacred, and so it belonged in the sanctuary of a covenant; it even constituted the covenant.

Paul talks a lot about this covenant in Ephesians 5. Now, if you read Ephesians 5 and think: “Paul is talking about marriage, not sex,” you need to understand that in Scripture, the thing that constitutes a marriage isn’t a certificate or a ring; it’s sex.

We don’t get that in our society; we’re promiscuous and repressed, which produces shame and denial, and so gender, sex, and marriage are very difficult to talk about, especially in church. I think that’s also why we get the idea that sex is a “dirty, filthy thing.” We think: “Sexuality doesn’t belong in the sanctuary, sex belongs outside the sanctuary of the covenant.”

You know? Sometimes I think that we, the Bride of Christ, have entirely lost sight of the story. It’s the plot of a story that gives meaning to every detail in the story. And if you don’t know the plot, anyone can lie to you about the meaning of each and every detail. So, let’s try to remember the story and the plot.

In Ephesians 5, Paul writes about gender, marriage, and sex, and then he reminds us of the bigger Story behind all of it: “For this reason, a man shall leave his father and his mother and cleave to his wife, and the two shall become one flesh.” He’s quoting Genesis 2:24.

Right before that, in Genesis 2:18 we read: “The Lord God said, ‘It is not good that the man should be alone; I will make him a helper fit for him.”

“A helper fit for him…” Now, it’s interesting to note that in the Hebrew the word “helper” (ayzer) is a masculine noun. It’s also interesting to note that at this point in the story, Adam is not entirely masculine. Actually, he’s a he-she, because where is she? She’s yet to be taken out of He-Adam. See women? This story has been about you all along…for you’re “in Adam,” and somehow, according to Paul, we’re all a bride, and brides are very feminine and not masculine.

It’s very interesting to note that the word “helper” in Scripture is almost always used for God. Twenty-five times in Psalms and each time we’re reminded: “God is our helper.”

Anyhow, God said, “It is not good that the Adam should be alone; I will make him a helper fit for him.” AND NOW, God makes animals…or at least brings animals He has made to Adam, so Adam can name them. And the whole time, it’s like God is asking Adam: “So is this your helper?” Every creature, all creation is brought to Adam.

See? It’s like all creation has been made just so that God can ask this question of Adam: “Who’s your helper?” We often make created things our helper. Paul refers to those things “idols.”

Genesis 2:20: “But Adam did not find a helper suitable for him.”

So, God begins the great lesson; He puts Adam to sleep and takes a rib (and actually the Hebrew is “side.”) He takes Adam’s side and fashions that side into Eve. He brings the woman to the man and the man declares: “…This is now bone of my bones and flesh of my flesh; she shall be called ‘woman,’ for she was taken out of man” (Gen.2:23).

And now back to the verse that Paul quotes in Ephesians: “That is why a man leaves his father and mother and is united to his wife, and they become one flesh. And the man and his wife were both naked, and they felt no shame” (Gen. 2:24-25).

And so, at last, Adam has found his helper…OR NOT!! Let’s read the next verse: “Now the serpent was more crafty than any other beast of the field that the Lord God had made. He said to the woman, ‘Did he actually say, “You shall not eat of any tree in the garden?”’” (Gen. 3).

So, did Adam find his helper?

How could Eve be his helper? She’s part of the one that needed help in the first place.

See? The Old Adam is like an empty place, like a womb. He’s like a form or mold into which a sculptor pours molten bronze, producing an eternal piece of art. While the form is cut away and discarded, Old Adam is the place in which the New Adam will be revealed.

So, Old Adam took Eve’s sin at the tree because he was a bad helper.

And maybe the old Adam creates a longing in the Bride so that when she sees the New Adam and hears Him cry: “It is finished,” she drops at the base of the tree crying, “My Lord and my God, my Helper.”

Can you hear God whispering right now in your ear, “Who’s your helper?”

Well anyway, back to Genesis, picture day six, back in the garden and then even outside the garden, God is still asking: “Who’s your Helper?” But now He’s not only using creation, and not only using animals, He’s using their very bodies to ask the question. He’s even using their very failures to ask the question . . . to create a longing and a capacity.

He’s saying, “Mankind–Adam…look at how you’re made: every urge, every desire, every longing…look at how fullness fills emptiness and produces life. Look at the emptiness in your own being; it’s like a womb. Now you know that you’ve sinned, are you ready to be filled with Mercy and known by Mercy? Adam aren’t you tired of being so alone? Are you ready to know and be known by your Helper? I am the Good and I am your Helper.”

And the story continues. Throughout the Old Testament, God tells Israel: “I am your helper,” and “Your maker is your husband” but it’s like they can’t see and can’t hear. They can’t know. It’s as if their ears and heart are covered.

In the New Testament, we meet Jesus, Yashua; the name means “God is salvation.” Or “I am Help.”

Jesus is the Word of God in human flesh.
Jesus is the Helper made fit for mankind.
Jesus is the Eschatos Adam, and we still didn’t recognize Him. . .
Until we nailed Him to the tree and took His life (that’s original sin.)

We took His life and yet He gave His life (and that’s the eternal plan).
There on the tree, He bore our sin and entered all our sorrows.
There He delivered up His Spirit, the Spirit of the “parakletos” The “Helper.”

And now, He fills all our empty shame with Mercy, our darkness with Light, our lies with Truth, our old man with Eternal Man. He longs to impregnate us—His Bride—with Himself, the very Seed of the Living God.

“Therefore a man shall leave his father and mother and hold fast to his wife, and the two shall become one flesh. This mystery is profound, and I am saying that it refers to the church” (Eph. 5:31).

So, does God really care about your sex life?
Absolutely!

Why did He even create sexuality? And why gender, and why marriage? Why the covenant of marriage and why failed marriages? Why the longing frustrations and pain? Why broken sexuality, and why the glimpses of ecstasy? It all refers to Christ and His Church–the Bride.

In all these things creation and desecration, good and evil, God is still asking, “Who’s your helper?” “Who’s your savior?” And He doesn’t want you to answer with just some words…but rather, your whole being.