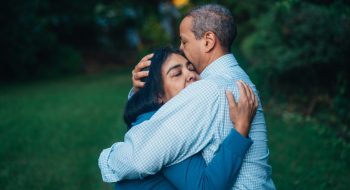 In the Lord’s prayer, Jesus prays, “…Forgive us our sins as we forgive those who sin against us…”

Have you ever wondered how to do that?
What does it mean to forgive as He has forgiven us?

Well, how did God in Christ forgive us?

But we say stuff like, “I can’t forgive that person unless they ask to be forgiven.”
Yet, we couldn’t even ask for grace unless God had already given us grace.
And Scripture reminds us: “Forgive, as God in Christ forgave you.”

How did God in Christ forgive us?

He forgave us before we sinned . . . and . . .
He forgave us completely.
Scripture says, “On Him the Lord has laid the iniquity of us all” …

And . . . He forgave us by giving His life and dying for us.
His body was broken; His blood spilled out, shed for us. He gave His life for us, and He died for us. And we were already dead, “dead in our trespasses and sins,” wrote Paul.
Wow! He died for the dead.

Jesus says, “Unless you drink my blood you have no life in you.” We’re already dead and yet terrified to die. Scripture says, “The devil keeps us in life-long bondage through the fear of death,” and yet we’re dead.

Remember what the snake said to Eve? Literally, “Dying you will not die.” God had told Adam, “The day you eat of it, you will die.” We eat of it on the sixth day of creation. That’s the day we are made. And this is that day for we’re still being made. On the Seventh Day, we have been made–finished, and we’ve entered God’s rest; that’s the New Creation.

At the tree in the garden…, we took The Life and cut ourselves off from the Source of Life. The Bible calls this the first death. “In the day you eat of it you will die,” so if you eat on the sixth day, you must be dead by the Seventh Day, the Sabbath Day. “Dying but not dead,” is to be stuck in the sixth day the 666 day. “Dying you will not die,” sounds like Heaven, but it’s the definition of Hell. Death is separation.

We’re like an appendage that has been “cut off…” It may contain blood, but dead blood, rather than blood—life. We’re like a part cut off or a vessel that’s clogged, like a heart that’s suffering from perosis, hardening of arteries.

In the Old Testament, God says to Israel, “You have a heart of stone but one day, I’ll give you a heart of flesh.” If you have a stone heart, you’re dead. That’s the first death, and we think it’s Life.

Revelation 14:13 says, “Blessed are the dead who die in the Lord.” Paul wrote, “It’s no longer I who live, but Christ who lives in me,” Eternal Life in me, Spirit in me, Fire in me, flowing through my veins.

And . . .
He bleeds for us, and He helps us bleed. At the tree in the garden, which we call the cross, we took His life, and yet He forgives His Life, and there He helps us to forgive.

And Paul writes, “Be tenderhearted, forgiving one another as God in Christ forgave you.”

If you’ve ever truly forgiven, you know that it sometimes feels like death because you are actually giving your life…

So, how on earth can we find the strength to forgive? Maybe we can’t . . . but Jesus can; our old man can’t…but the New Man can…

If you forgive, it’s not you that’s actually doing the forgiving; you’re letting Jesus forgive in you. If you give your Life, it’s not your Life that you are giving, it’s Christ’s Life, because “He is the Life.”

To forgive is to die with Christ and rise with Christ.
Forgiveness is bleeding, but it’s not your blood that you’re bleeding.

People will sin against you, and I don’t think it’s an accident.
They may intend it for evil, but God intends it for good.
He’s teaching you to forgive. It feels like death, but it’s the death of death: it’s life.

God is making you in His image and God is Grace.

This devotional was prepared by Kimberly Weynen, Peter Hiett’s assistant. It is primarily a compilation of excerpts from the sermon TheoLogic and a few devotional thoughts from Kimberly. You can read, watch or listen to the full sermon here: Theologic

*Discussion questions are available for this sermon here: 3.10.2013 Discussion Questions