God Has a Dream! 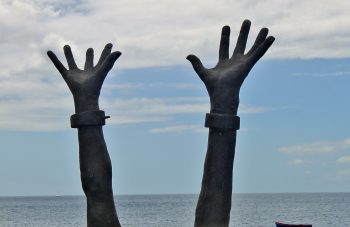 Sometimes, some of the things we read in Scripture seem really hard to swallow. Here’s one example: “Slaves (doulos), obey your earthly masters with fear and trembling, with a sincere heart, as you would Christ, not by the way of eye-service, as people-pleasers, but as servants (doulos) of Christ, doing the will of God from the heart (literally: psyche, “soul”), rendering service with a good will as to the Lord (same word as “Master”) and not to man, knowing that whatever good anyone does, this he will receive back from the Lord, whether he is a slave (doulos) or is free. Masters do the same to them, and stop your threatening, knowing that he who is both their Master and yours is in heaven, and that there is no partiality with him” (Ephesians 6:5-9).

Now that’s a bit embarrassing isn’t it? You can bet that slave traders have used those verses for 2000 years. In Colossians 3, Paul says the same thing. In 1 Peter 2, Peter says the same thing. The whole book of Philemon is a letter from Saint Paul to a slave owner named Philemon informing him that Paul is sending Onesimus (Philemon’s runaway slave) back to Philemon.

It’s all very embarrassing, and so modern enlightened believers work desperately to explain these verses away. But there’s really no way around it. The word translated as slave is the Greek word doulos, which clearly means: “slave” and at the time that passage was written slaves had no rights.

Some have argued that slavery in places like Ephesus in the Roman Empire just wasn’t that bad. But in reality, the Roman Empire had about sixty million slaves. A Roman slave was the property of the “pater familias”—the father and head of the Roman household. He had absolute power over his slaves, his children, and his wife—even authority to execute them. And that’s what makes Ephesians 5 & 6 even more challenging for us modern readers.

In Ephesians, prior to this passage, Paul has informed us:

1:3 “We have been blessed with every spiritual blessing in the heavenly places…”
1:19 “There is an immeasurable power in us that believe…”
2:14 “He has broken down the dividing wall of hostility…making us one…”
And in 4:6 “There is one God and Father of all…”

In Ephesians 5 & 6 Paul wrote, “Wives submit to your husbands as to the Lord.” “Children obey your parents in the Lord.” “Slaves obey your earthly masters, with fear and trembling, with a sincere heart as you would Christ.”

And so we wonder: “Why doesn’t Paul take ‘these truths to be self-evident, that all men are created equal, with certain inalienable rights to life, liberty and the pursuit of happiness?’”

But he minced no words; Paul said, “Slaves obey your earthly masters…as you would Christ.”

If you really think about it, any earthy religion or government can turn slaves into masters, but only God, in Christ Jesus, through the power of the New and Eternal Covenant can turn masters into slaves, and by slaves I mean slaves of righteousness— men and women who choose to wash the feet of their enemies because they freely want to . . . because they have a dream to love and serve the way Jesus serves and loves.

Maybe Paul didn’t tell slaves to become masters because he actually wanted every master to become a slave because the slaves weren’t wrong…but right…and the masters weren’t right…but wrong.

Imagine three persons each serving the other person—like three persons and one substance called Love. You know? God is Love! If all became slaves of righteousness, we might all become one . . . like God is ONE.

And He also said, “Woe to the rich now…the full now;” “Woe to you when all people speak well of you;” “Woe to the masters-the lords of this earth.”

So maybe Paul’s words aren’t as backward as we might think.

It must’ve been a bit shocking that Paul would even address slaves as if they had a will of their own. And He even said something revolutionary, after addressing the slaves, “Slaves obey your earthly masters with fear and trembling, with a sincere heart, as you would Christ…” He addressed the masters and wrote, “Masters do the same to them…”

Did you catch that? That’s revolutionary: “Masters you must become slaves to your slaves!”

Paul says the same in Colossians, and Peter says the same in 1 Peter, and in Philemon, Paul tells Philemon: I’m sending Onesimus [your slave] back as my own child, my own heart…Receive him back as a beloved brother!

You Know? If Philemon just released Onesimus, Onesimus would be chained to destitution and poverty. But Paul wrote, “Take him back as a beloved brother in the Lord.”

Do you hear it? Paul sounds a bit like Martin Luther King! Paul was saying, “I have a dream!” And His dream is God’s dream; Jesus is the dream: the Master of all who became the slave of all and who is over all and through all and in all. But the way we get there is not by turning slaves into masters; it’s by turning every master into a slave.

“This is how we know what love is: Jesus Christ laid down his life for us. And we ought to lay down our lives for our brothers and sisters” (1 John 3:16-17).