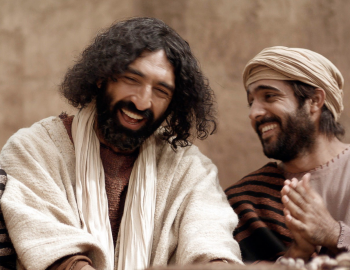 In John 1, John the Baptist sets the stage for the invasion of this world by the kingdom of God. When the Pharisees ask him who he is (they are thinking he might be the Messiah), he boldly confesses, “I am not the Messiah.” “I am the voice of one crying out in the wilderness, ‘Make straight the way of the Lord,’ as the prophet Isaiah said… But among you stands one you do not know, even he who comes after me, the strap of whose sandal I am not worthy to untie.”

Can you imagine the anticipation and excitement of those Pharisees hearing that someone even greater than John the Baptist was among them—someone whose sandal he was not worthy to untie?

The next day the excitement escalates; Jesus walks towards John and looking at Jesus, John says, “Behold, the Lamb of God, who takes away the sin of the world! This is he of whom I said, ‘After me comes a man who ranks before me, because he was before me…’ I have seen and have borne witness that this is the Son of God.”

Wow! The Son of God—the Messiah in their midst!! I bet they wondered: What might happen next? Probably something amazing, something revolutionary, something the world had never before seen, right?

If we keep reading on in John 1, Scripture tells us that very next day John was standing with two of his disciples; he looked at Jesus as He walked by and—once again— he said, “Behold, the Lamb of God!” But Jesus didn’t do anything flashy or what we might consider exciting; apparently, He just kept walking and doing whatever it was that He was doing.

Well, shortly after, the two disciples that heard John’s declaration followed Jesus. Jesus turned and saw them following and said to them,  “What are you seeking?” And they said to him, “Rabbi (which means teacher), where are you staying?” He replied, “Come and you will see.” So they came and saw where He was staying, and they stayed with Him that day, for it was about four o’clock…”

Now, I don’t know about you, but that seems a bit anti-climactic. . .

But that’s it; that’s how the invasion begins. And it’s not much better in the other parts of Scripture either: sure there are exciting proclamations, prophecies, and angels, but following those . . .  a simple baby wrapped in swaddling clothes and lying in a food trough. Then, a simple man often rejected by men, walking on dirt roads, and for most of the time living a simple life.

In John 1, we read about how the Word became flesh;  it’s the invasion of our world and of our hearts, and yet, Jesus is simply going about His business, then a couple guys decide to follow Him; He asks them a question; they all walk; they talk, and they hang out.

You may think to yourself, “Well dang. I could do that!” And that’s an interesting thought—maybe that’s even part of the point—because later in the Gospel of John Jesus will say: “As the father sent me, so send I you…”

But how does the Father send Jesus? How does Jesus send us?

From our perspective (from Earth), when Jesus “invades” our world the invasion isn’t necessarily what we’d expect. Jesus invades in ways that don’t seem powerful or glorious . . . but rather ordinary. How do we explain such an anti-climactic invasion, such an unapocalyptic apocalypse?

In John 1:18, John writes, “No one has seen God,” and then he continues: “The only begotten son, from the bosom of the Father, he has made him known.” The word for “known” here in Greek is exegeomai – What we see in John 1 and the other gospels is Jesus exegeting God. If that were a noun, in Greek, you might say, “Jesus is the Apocalypses.” Jesus is the Revelation of God – that’s what apocalypse means. And He’s from the kolpos (the bosom) of the Father. It’s where you place your ear to hear a person’s heartbeat!

So it appears God’s wanting to reveal Himself—His very heart to us—in a way that we can comprehend . . . His invasion is more of an invitation . . . an invitation that will not fail—because it is perfect Love, and Love never fails. He invades—not by might or power—but in relationship and through the power His Spirit. From our perspective, it seems weak but from the perspective of Heaven, it’s deeply powerful, powerful enough to reconcile every human heart.

We think invasion can only happen from the outside in, through the firepower of this world, but the firepower of this world is utterly powerless over hearts. Jesus invades from the inside out, and from the inside out He creates all things, gives life to all things and enlightens everyone: “In the beginning was the Word, and the Word was with God, and the Word was God. He was in the beginning with God. All things were made through him, and without him was not anything made that was made. In him was life, and the life was the light of men. The light shines in the darkness, and the darkness has not overcome it” (John 1:1-4).

You see? John 1 is the story of the Eternal Word invading time. We read John and wonder how one person hanging out with a few others, letting them stay with them for a while could be consequential—and yet, it’s how the Word—THE Logic, THE Rhythm of THE very Heart of God invades the world.

We think in order to make an impact we need something flashy; we need schedules, classes, degrees, programs, governments, armies, cool lasers, and nuclear warheads (if we’re really going to invade or impact the world), but John is telling us no, that’s all mist and vapor compared to The Word; if you want to change the world just get to know the Word, spend time with the Logos, and listen to the Rhythm of the Father’s heart; that’s how the Word invades hearts: He does it in relationship.

Once you’ve heard His heartbeat, His Rhythm starts to pump in your very own heart and it will set your feet to dancing. You’ll start to desire to get closer to others so that they might hear your heartbeat. That’s called making disciples.

That’s how Jesus invades this world.
That’s Emmanuel—God with us—revealed in us.
And He speaks to our hearts, “As the Father sent me, so send I you.”

This devotional was prepared by Kimberly Weynen, Peter Hiett’s assistant. It is a compilation of devotional thoughts from Kimberly and  excerpts from Peter’s sermon titled: “How to Invade the World.” To read, watch or listen to the sermon in its entirety click here: How To Invade the World