The Incarnation—Bigger Than We Can Imagine 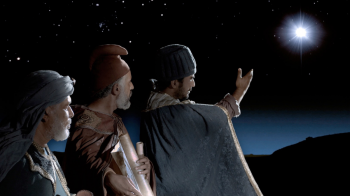 What does Christmas mean for someone that’s never heard about Jesus?

In a sermon, many years ago, Peter told a story that has fascinated me for quite some time:

“In 1962, Don Richardson became a missionary along with his wife, Carol, and his son, Stephen, to the Sawee people of Netherlands, New Guinea. These people had never been contacted by a white man before, nor had they ever seen metal. They still lived in the Stone Age and still practiced cannibalism. When he moved into the jungle, three different tribes, fascinated with his white skin and modern technology, moved to surround their jungle home. I’m sure that made him nervous at the first.

Eventually, he learned the Sawee language. He said the day came when he finally climbed up into their Sawee man-house. There, surrounded by human skulls, he began to share the story of Jesus with them. He told them about the Jews and about the exile, about the Lamb of God that was slain for the sins of the earth. They were just bored to tears. When he got to Judas, they got all excited because, in their culture, treachery like that was an honorable trait. Judaism was a set up for Jesus in Israel, but in the Netherlands, New Guinea — it just didn’t work.

Extremely frustrated, he decided to leave. He told them it was because he wasn’t getting his message across, and also because fourteen civil wars had broken out around his house, now that these two tribes were so close together. When he told them he was going to leave, they came to him together and said, “If you don’t leave, we promise we will make peace.”

In his book, “Peace Child”, Richardson says he woke in the morning to see the most incredible, passionate ritual he’d ever seen in his life. There was a clearing in front of their jungle home. One tribe lined up on one side, and one tribe lined up on the other side. The air was tense and people were nervous.

Then someone from the other tribe grabbed his child from his wife and ran across in the same way and gave it to the first tribe. As Richardson stood there, he understood what they were doing as they went through their ritual. They had an agreement that as long as the peace children lived, there would be peace. But when one died, all hell would break loose.

As he watched, bells started going off in his head. He realized this was it — the altar to the unknown god, like Paul had in Athens (see Acts 17). This was the redemptive analogy — this was what God was doing in their culture. That night, he climbed up into the Sawee man-house, and he told them how God had given his Son as a Peace Child so we might have peace with God, and how He would never die, and our peace would last forever if only we received the Child.

He describes one Christmas day when hundreds of Sawee people gathered together in one giant communal church – people, who only six years earlier had been cannibalizing each other, sat together singing songs. Then the Sawee preacher got up. In his own language, he quoted Scripture, which few people in all the world could understand as well as those cannibalistic New Guinea, Sawee people.

He read Isaiah 9:6, ‘Unto us a child is born. Unto us a Son is given and the government will be on his shoulders and his name shall be called Wonderful Counselor, The Mighty God, The Everlasting Father, The Prince of Peace.’ He said that was the best Christmas Day he ever experienced because it was really Christmas.”

Could the incarnation of God be even bigger than we imagine? We often think of Jesus, of God, in terms of our own limited understanding of Him. We think of Him within the limits of our own minds, culture, and traditions. But Scripture says, “…the Father has sent his Son to be the Savior of the WORLD” (1 John 4:14). But how can this God, born in space and time, at one point in history, make Himself known to those who have never even heard of Him? Is He still being made known in our world today? Absolutely! He’s working through His Body, His Church, just like He worked through Don Richardson.

The incarnation of God is much bigger than His birth over 2000 years ago in the town of Bethlehem. The God of the Universe continues to be born in and through His church today.

If we know Him and have welcomed Him into our home, wherever we go, we can carry Christmas with us–The Prince of Peace incarnate through us. We have received Him, so we are His body. We carry the Bread of Life–food for the world–within our very selves. We are much like Mary, pregnant with the Bread of Life. And the world, is like Bethlehem (Did you know Bethlehem, in Hebrew, means house of bread?)– The world is a house just waiting to welcome their Savior, their Hope, the Bread of Life, that which they have hungered for.

Will you carry Him to a hungry world?

*This devotional was prepared by Kimberly Weynen, Peter Hiett’s assistant.