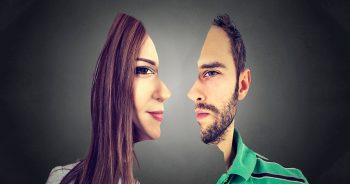 Let’s take a look at it:

“….Submitting to one another out of reverence for Christ. (Literally: “in fear of Christ”) Wives, submit (“subordinate yourselves” – Markus Barth) to your own husbands, as to the Lord. For the husband is the head of the wife even as Christ is the head of the church, his body, and is himself its Savior. Now as the church submits to Christ, so also wives should submit in everything to their husbands.”

[Now please note: since the wife is also the church and her husband is also Christ. She shouldn’t obey her earthly husband if it violates her obedience to Christ (her ultimate Husband). Yet, Paul still wrote: “Subordinate yourself in everything.”]

“Husbands, love your wives, as Christ loved the church and gave himself up for her, that he might sanctify her, having cleansed her by the washing of water with the word, so that he might present the church to himself in splendor, without spot or wrinkle or any such thing, that she might be holy and without blemish.”

Wow! Well, of course, that’s not very politically correct! And it clearly holds the potential for an immense amount of abuse and incredible pain, and yet, it’s clear that Paul seems to think there are differences between men and women and those differences might affect roles we play and how we relate.

I think we’d all agree that men and women are different. Right?
We’re just confused about how they’re different and what it means.

“Our sexuality penetrates to the deepest metaphysical ground of our personality. As a result, the physical differences between the man and the woman are a parable of the psychical and spiritual differences of a more ultimate nature.”

How do you handle that feeling?
Do you try to seize that which is not yours?

I can think of a time when something similar happened in Genesis—when some people felt incomplete and tried to seize what was yet not theirs.

We cover it up too, and what do we cover?

But perhaps there is a better way.

“In this same way, husbands ought to love their wives as their own bodies. He who loves his wife loves himself. After all, no one ever hated their own body, but they feed and care for their body, just as Christ does the church— for we are members of his body. “For this reason a man will leave his father and mother and be united to his wife, and the two will become one flesh.” This is a profound mystery—but I am talking about Christ and the church.”

Paul quotes Genesis chapter two and says it all refers to Christ and His Bride, the Church. Just think about that:

Adam means “humanity.” Adam was one; Adam was he and she. But Adam didn’t recognize his Helper, who is God, so God took one side of Adam and made Eve. He told Adam to cleave to Eve in the hope that all humanity would learn to cleave to Him, for God is our helper–God is Salvation…made fit for us on a tree, called the cross. God is Jesus. Jesus is the ultimate Adam, and we are His Bride.

The Bible ends with a wedding feast—the wedding feast of Jesus and His Bride!
Therefore, two persons become one flesh.

Nothing is wasted: All the yearning…

All the longing… prepares you for your final destination,

Before we ever tried to seize what we thought we did not have, God had made provision to fill our deepest longings with Himself!

Do you see? Even though we might feel incomplete or unfinished—tempted to seize what is not yet ours—He finishes us.
He completes us with Himself.

“‘The two will become one flesh.’ This is a profound mystery—but I am talking about Christ and the church.”