Is There A God? 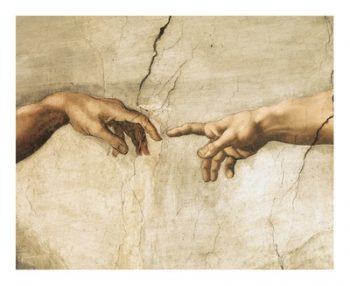 The way we modern people try to answer that question is absurd.

Imagine for a moment that you are God holding a box in your hands; it’s the universe. All space, all time, all matter is in the box: the universe. You are not in the box, rather, you are holding the box.

Now, here are some facts about the universe—the imaginary box that you—as “God” are holding. Recent estimates are that the universe is 156 billion light years across. That is, if the universe were not still expanding, it would take light 156 billion years to go from one side to the other.

Now, imagine humanity in the utterly miniscule speck that is our solar system, on the unimaginably miniscule speck that is our planet, in one particular spot, at one particular time, examines some clam fossils . . . because he is a specialist in fossilized Cretaceous mollusks. Then based on what he empirically and objectively observes, he writes a book stating, “There is no God,” that is, “There is no one holding the box.” So all the modern, technologically advanced, scientific people say, “Well, he is an expert . . . so that must be the truth.”

Well, that’s absurd, isn’t it? It’s absurd because some questions are way too big for any specialist.

Some specialist invariably says, “We’ve examined the clam fossils and have concluded there is no God.” So what do we Christians do? We call in our own specialists, who go out to the same spot and analyze the same clams and say, “There’s a lack of transitional forms in the clam sequence; therefore, God exists. Someone’s holding the box.” Then all of us modern, technologically advanced, religious people say, “There is a God because our specialists say so . . . our scientists have concluded.”

When people ask, “Is there a God?” perhaps we ought to answer, “No. There is no God. There is a planet Uranus, there is a clam sequence in the Cretaceous sediment, there are a multitude of objects in this world, but God is not an object [of scientific observation] in this world.”

Even if you understood every individual part of a Ford motorcar, took it apart and analyzed each piece, you still wouldn’t find Henry Ford. And the car would no
longer run. You’ve dissected it. Yet a whole Ford motor car is a beautiful testimony to a person named Henry Ford.

God may not be a thing in His world, yet the whole thing can bear testimony to its maker.

Imagine if you were at the symphony and commented, “Oh, wasn’t that a wonderful symphony!” and a man says, “There was no symphony. I’m a specialist. I specialize in D flat; I have studied the note D flat. I didn’t hear a symphony.”

Certain questions are way too big for any specialist

“Is there a God?” “Do I matter?” Do not concede those questions to any specialist or expert . . . biologist, geologist, pastor, or theologian. They can’t answer the question for you, and they’re not supposed to.

Remember how I asked you to imagine yourself as God holding a box that represents the universe? Well, now go back to that and imagine if you spoke to the people in that box—the universe: “Hey, people! How’s it going, eh? Hang in there. Love you guys!” Well, everything and everyone everywhere and everywhen would vibrate with the sound of your words. Yet your words would not simply be a thing in the box. So people couldn’t say, “Here it is!” or “There it is! I found the Word—I found God!”

That’s all a bit fascinating when you take a look at Scripture. “In the beginning (Be’rasheet) God created.” Some think that should be translated, “With wisdom God created.”

In Genesis 1, God speaks creation into existence. Speaking is breath that carries wisdom encoded in vibrations we call words.

Logos in Greek means: meaning, logic, reason, wisdom, word. John goes on to say that Word contains life, and the life is the light of men. The Word is logic, meaning, reason, truth, life, and light. And Scripture is clear that God does not only create with His Word; He maintains and sustains all things with this Word.

The “box”—the universe—is upheld by this Word. So, God is continually speaking into the box (His creation). In fact, all creation is the manifestation of His Word.

Scientists don’t know what meaning is, but everything is like the manifestation of meaning.

The Bible says everything is the manifestation of Word. That Word “was with God” and “the Word is God.” Paul writes, “In him, we live and move and have our being.” Indeed we swim in God, like fish in water.

Somebody wrote: “We’re not sure who discovered water, but we’re pretty sure it wasn’t fish.” Fish don’t say, “Oh, here it is!” or “There it is! I found water!” Yet everywhere they go, they assume it.

We swim in God like fish swim in water, so for us to even ask the question, we assume the answer.

If you ask, “Is God real?” you must assume reality. And God is reality.

If you ask, “Is God true?” you must assume truth. And God is truth.

So how are we to answer?

Maybe we can’t . . . but He can in us. Maybe He’s doing it all the time. Maybe we can’t prove God but He’s proving us—“making us in His image.” Maybe we can’t comprehend God, but He comprehends us—revealing Himself to us, answering His question in us . . .

Every time you seek meaning or ask, “Is it truth?”

Every time you yearn for love.

Every time you weep for those you’ve lost and ask, “Does he or she matter?” and every fiber of your being vibrates with the answer: Yes!

We answer not by sight (our objective, detached observation),

But by faith (our subjective encounter with the living God). Kind of like how we answer the question, “Do you like the symphony?” or “Do you love your wife?”

And then this is the choice:

When my kids were little and we had nothing to do, I used to take them fossil hunting for Inoceramus clams. Some people think these clams are a few thousand years old. I think they’re 80 million years old.

The first time I took my son, Jon, hunting for clams, I kept showing him what they looked like, but he couldn’t seem to find any. So finally I found a nice one, set it on a ledge, and said, “Hey, buddy, this is a good spot. Come look over here.” Well, pretty soon I heard him yelling, “Oh, wow! Daddy! Daddy! I found one!” Jon cradled that clam in his arms like a treasure.

Hey, Jon, just think! About 80 million years ago, there was a warm, shallow ocean right in this spot. Giant sea creatures swam in that ocean above this spot, and dinosaurs walked on the beach to the west of this spot. God made it all, and then He made this clam on the bottom of that sea. He buried it here in the mud, and the mud turned to rock. It was here when the dinosaurs became extinct and the mountains pushed up. It was here when God made Adam and Eve; it was here when Jesus walked the earth; it was here while kingdoms rose and kingdoms fell. And when God buried it here in this spot, do you know what He was thinking about? He was thinking about you . . . and the day you would ride your bike down the bike path, climb this hill, find this clam, pick it up, and say, “Wow!” You see, Jon, you must matter to Him a lot.

You may be seeking the Father . . .
But with all creation, the Father is seeking your heart.