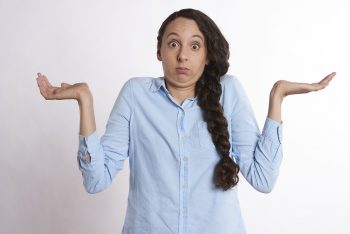 Have you ever read something in scripture and thought: “This is trying to reveal to me what’s right; I want to do what’s right, but there are so many different interpretations of what can be defined as “right,” how do I know what’s actually right?”

Take Ephesians 5:4 for example, Paul wrote: “Let there be no filthiness nor foolish talk nor crude joking, which are out of place, but instead let there be thanksgiving.”

Well . . . okay, but what exactly is “filthiness” or “foolish talk” or “crude joking”? I mean, where do you draw the line of where these things start or end? Are filthiness, foolish talk, and crude joking a list of words or phrases that our society judges to be bad?

In some places in Scripture, when you look at the Greek or Hebrew you see there are some pretty “bad” words used. I mean Paul went out of his way to find the most vulgar words possible to describe some things. For example, here’s how he described his religious life in Philippians 3. “As to the law a Pharisee…as to righteousness under the law, blameless…I consider it all scubula, that I may gain Christ.” Some ancient scribes wouldn’t even copy that word, scubula, and few will even translate the word. There’s an obvious translation and it’s not “refuse!”

So, in Ephesians 5:4, when Paul talks about not letting there be any filthiness, foolish talk, and crude joking, he must not be talking about a vocabulary list or petty or vulgar words. He must be talking about something other than a “list of bad words or phrases”.

Maybe the thing that makes bad talk bad isn’t really about the specific vocabulary we use.So, why do we come up with vocabulary lists and make laws?

I’m no expert on first-century Jewish culture, so I don’t know if they had many “unspeakable words” like our “bad” words. But I do know they had one unspeakable word and the punishment for speaking that word was death, and that word was, Yahweh or possibly “Yehovah” or “Jehovah.” It was the name revealed to Moses at the burning bush, when God said, “I AM WHO I AM.” It was there that God told Moses His name. Then God said, “This is my name forever, and thus I am to be remembered throughout all generations.”

But about three hundred years before Christ, the religious authorities began to forbid common people from speaking the name for fear that they might take the name in vain. So, by the time of Christ, it appears that only the High Priest uttered the name, once a year, in the Sanctuary, on the Day of Atonement.

When the temple was destroyed, no one uttered the name. And because the vowels weren’t added to the text until the Middle Ages, people couldn’t remember the pronunciation of the vowels to God’s name when the vowels were once again added.

Isn’t it ironic where our attempts to judge can lead? By the time of Jesus, the religious leaders were so concerned about saving people from God, and saving God from people who might take His name in vain that they outlawed taking His name…at all.

So, what does it mean to take the Lord’s name in vain? Well, isn’t it to use God’s name for your own vain purposes—like condemning others and justifying yourself, and saying things like, “God says, I’m good, and you are bad”?

Isn’t it like making Yahweh your errand boy? Isn’t it like nailing Yahweh down to your will–your “knowledge of good and evil” in order to serve your own agenda?

Well, it’s ironic that in an effort to obey the Law, it was against the Law even to say the name of Yahweh, and it was then that they nailed Yahweh to a tree according to their understanding of the Law.

So, anyway, what makes bad talk bad? What is this filthiness, foolish talk, and crude joking that Paul talks about? And how are we supposed to figure it out if our attempts at judging things seem to just end us up in an even bigger mess than the one we were in before?

Well, again, I don’t think Paul is talking about some list of words or laws about words, and yet it’s not as if words don’t matter.

Paul tells us how important our speech is in Ephesians 4:25 “…Let each one of you speak the truth with his neighbor, for we are members one of another.”

So our words matter. Speaking the truth matters: “Speak the Truth…”

But then we’re back to a similar dilemma —like we had at the start regarding how to define “filthiness,” “foolish talk,” and “crude joking”. Now, we find ourselves asking, “If we are to speak the truth, how do we define truth?” “Can truth be defined by us? What exactly is truth? Or even better who is truth?”

These are great questions! But I don’t think truth can be defined by us. It is defined by God . . . through a Word: Jesus. Jesus said, “I am . . . the truth . . .” Jesus is the Truth and the Father reveals Himself/Truth to us through His Word—Jesus—Love Incarnate.

Maybe letting there be no filthiness, foolish talk, and crude joking, and speaking the truth isn’t about judging or defining but about knowing the Truth and as a result we begin to recognize “not Truth.”

Paul wrote: “Therefore be imitators of God, as beloved children.”

Maybe speaking the truth and putting off all that is not Truth is about knowing Truth and then imitating Truth. And Truth is a person. Jesus said, “I am the Truth” and “If you’ve seen me you’ve seen the Father.”

So maybe better questions to ask might be questions like:
“How does Yahweh, our Father, talk?”
What’s the Word that He speaks?

“Let there be no filthiness, nor foolish talk, nor crude joking, which [don’t fit] but instead let there be eucharistia, [translated “thanksgiving]” literally “good grace,” that is, “thanksgiving.”

Maybe we need to simply LOOK at Truth & then just LET there be no filthiness, nor foolish talk, nor crude joking…

Eucharista is where we get our word Eucharist from.
It is the place we come to know and partake of the good grace of Christ.

It seems quite evident that we aren’t that great at judging what is right or wrong, so, instead . . .
Let’s come to the table and be known by the Truth so that we may know the Truth.
Let’s LET the Word of Truth fill us rather than filling ourselves with judgment of ourselves and others.
Let’s LET His Word judge us with Grace and Love.
Let’s LET His Judgment of LOVE replace our judgment, and instead of our word let’s be filled with His Word of Good Grace.

This devotional was prepared by Kimberly Weynen, Peter Hiett’s assistant. It is a compilation of devotional thoughts from Kimberly and excerpts from Peter’s sermon titled “Talk This Way.” To read, watch or listen to the sermon in its entirety click here: Talk This Way