The Life is In the Blood 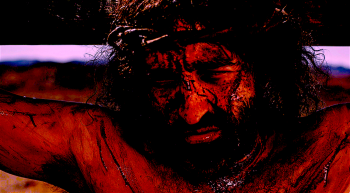 I think it is utterly fascinating to take Scripture literally. Not mechanically, like you take the owner’s manual of your car, but rather literally—according to the author’s literal intent.

In Leviticus 17:11 the Lord says to Moses: “… the life is in the blood, and I have given it for you all, to make atonement for all your lives.”

Put your hands on your carotid artery. Feel your pulse. You’re feeling the life circulate in your flesh. Look at the veins in your arms. They’re full of life. It’s life, but not your life . . .

You know? If you really believed that your life was indeed Christ’s life—that your blood was His blood, no one could take your blood. So you might feel pain but you would be impossible to offend.

Jesus appears to be impossible to offend. He got angry on behalf of others. And He certainly didn’t mince words when speaking to whitewashed tombs, but when people sinned against Jesus, how often did He say, “You know…I’m just really offended!”? Can you think of a time when Jesus got offended?

Actually, the whole world is offended that Jesus wouldn’t get offended. That’s called “the offense of the Gospel.” When the sin of the world was loaded on His back, when His own people nailed Him to the tree, when His Bride stripped Him and drew His blood, He cried out, “Father, forgive them.”

And yet there does seem to be one place in Scripture that speaks of one thing that is unforgivable in God’s eyes:

Yikes! We call that “the unforgivable sin.” We wonder what blasphemy against the Holy Spirit actually is. And we wonder if we’ve committed it. So, what is this sin that won’t be forgiven?

People debate, but Jesus tells us what won’t be forgiven. Jesus said, “If you don’t forgive others their trespasses, neither will your Father forgive your trespasses.” He said to pray, “Forgive us our debts as we forgive our debtors.”

Have you ever not forgiven someone?

Lost until you acknowledge the way.

Trapped in a lie until you see the truth.

Dead until you surrender to life.

And Jesus is the Way, the Truth, the Life, and the Light.

Ephesians 4:9 says that Jesus descended into Hell, “the lowest parts of the earth.” And we know that one day “every knee will bow and every tongue give praise, for Jesus is Lord to the glory of God” —the glory of God’s grace.

But the process of bending our knees and surrendering our hearts so that his life freely flows through us and out of us in forgiveness is hard. Forgiveness is hard and it can be painful. It can feel like a call to bleed when we feel like we have no blood to give.

You might say, “I’ve been so wounded I don’t have any blood to give.” But that is a lie because, in reality, we never had any blood to give. We don’t own the blood. It’s not our life and not our blood. And when we think it’s our blood, when we refuse to bleed Christ’s blood it’s the unforgivable sin. It’s death.

Think about your own body: all the members of your body constantly forgive. It’s called life. But there’s one thing that cannot be forgiven, and that’s when one member calls the life its own, claims the blood as its own, and refuses to bleed. If a member refuses to give blood, it can no longer receive blood.

So each member must lose its life in order to find its life, forgive life to be given life. And if a member seeks to save its own life, it dies.

God will unite all things under one head making peace by the blood of His cross. And already God is uniting us who have hoped in Christ as one Body, under one wounded head—His head. And that means my life is not my own. It’s my flesh—my pride—that tells me not to bleed. But if I don’t give blood, I can’t receive blood.

And wherever you draw someone else’s blood, you can choose to receive Christ’s blood. You can be forgiven. It was Christ you sinned against, and Christ forgives you.

Maybe while reading this you are thinking of a person you need to forgive. Maybe that person is you. You can forgive you. But maybe it was somebody else. You have enough blood to forgive, for all the blood has been forgiven you, and the source of blood is your Creator.

I encourage you to think about those people you need to forgive and say this: “In the name of Jesus and under the authority of His blood, I forgive.” In your heart offer up those people to the Lord. And now say, “Let it be.”

It kind of hurts at first. But hang in there. It’s just the edge of life. Forgiven, you can forgive. It’s not bad news; it’s the best news. For a moment it is sad…but for all eternity it’s unspeakable joy! There is life, and power, and joy in the blood.

This devotional was prepared by Kimberly Weynen, Peter Hiett’s assistant. It is primarily a compilation of excerpts from Peter’s sermon titled “Forgiven Forgiver” and devotional thoughts from Kimberly. To read, watch or listen to the sermon in its entirety click here: Forgiven Forgiver