Not Alone in The Birth Pains 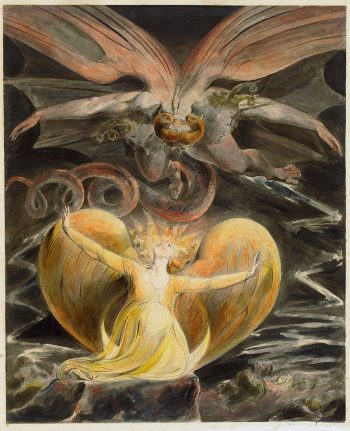 Revelation 12:13-17: And when the dragon saw that he had been thrown down to the earth, he pursued the woman who had borne the male child. But the woman was given the two wings of the great eagle that she might fly from the serpent into the wilderness, to the place where she is to be nourished for a time, and times, and half a time. The serpent poured water like a river out of his mouth after the woman, to sweep her away with the flood. But the earth came to the help of the woman, and the earth opened its mouth and swallowed the river which the dragon had poured from his mouth. Then the dragon was angry with the woman, and went off to make war on the rest of her offspring, on those who keep the commandments of God and bear testimony to Jesus. And the dragon stood on the sand of the sea.

That kind of sounds like Christmas, doesn’t it? Well…maybe not the kind of Christmas we might think of right away with pretty Christmas trees, a lovely church choir, and warm, comfortable congregants singing hymns in a church with a steeple. But I mean like the real Christmas: a pregnant teenager in travail about to give birth, a king’s army chasing after her newly born baby in order to kill him, and a young family forced to move to safety in the wilderness.

Almost all Bible teachers are unanimous on the identity of that baby in Revelation 12. It’s the Word of God, Jesus. But who is this woman? That’s the confusing part.

Catholic theologians have argued that she’s Mary. But she’s kind of large for Mary. Some argue that the woman is Eve, and that makes some sense. If you’ll remember, long ago Eve had a run-in with the dragon in the garden. He tempted her, she fell, along with Adam; God shows up, curses the dragon, and casts it to the earth saying, “You will craw on your belly all the days of your life.”

Then He says, “I will put enmity between you and the woman, and between your seed, dragon, and hers. And he [her seed] will crush your head, and you will crush his heel.” Then God said to Eve, “I will greatly multiply your pain in childbirth.” Anguish. “The seed will save you, Eve, and you will give birth to the seed in anguish” (Genesis 3).

It’s pretty clear that Jesus is that Promised Seed. But technically, Eve didn’t give birth to Jesus, except through a long line—a genealogy—a lineage—a bunch of other mothers. So some people have argued that that woman is that genealogy, or that the woman is Israel.

Then there’s a host of lesser-known sinners like Rahab, the Gentile harlot. (Jesus had quite a bit of Gentile blood, it seems.) Jesus was of the house of Judah, but that was only because his great–great–great–great–grandmother Tamar disguised herself as a hooker and got her father-in-law Judah to have sex with her. It’s quite a lineage. And just like the stable where Jesus was born, Jesus doesn’t seem all that concerned about hiding the mess.

Just think of it: The Promised Seed from God Himself implanted in poor, teenage peasant flesh from that lineage; then born in desperation and confusion in a stinking barn in an occupied and oppressed country. That must have been incredible anguish!

Some would argue that the woman in Revelation 12 is Israel or the genealogy of Jesus. Yet after the child is taken up into heaven, this woman has more kids. These children bear testimony to Jesus, and that hardly sounds like Israel, at least the Israel we normally think of. Yet you must remember that Paul and John taught that we—the Church— are Israel.

But we are Jesus’ brothers and sisters, right? . . . not mother. But wait: Jesus said, “Whoever does the will of my Father in heaven is my brother and sister and mother” (Matthew 12:50).

Believers, you are Christ’s brothers and sisters, and that means you have the same father as Jesus. But that also means you have the same mother as Jesus, and you are that mother! (I know, it sounds kind of strange.) But that’s what Jesus said: “Whoever does the will of my Father is . . . my mother.” He told us who His mother was. So then the woman must be God’s people throughout time . . . whoever does the will of the Father throughout time.

In what way could Jesus be born, and live, and ascend more than once in Bethlehem and Palestine? How is it that Paul could write that He was tempted in every way as I am and you are? He’s never been raped as a woman! He’s never had to moderate a Session meeting during a budget crisis! And how is it that you and I could be His mother? How could we be that woman in Revelation 12?

The seven churches mentioned in the book of Revelation were in Asia Minor— next door to the province of Galatia. So these churches that received the Revelation probably had Galatians as well as Ephesians and Colossians. In Galatians, Paul writes, “It is no longer I who live but Christ who lives in me.”

How did He get there? Paul goes on to tell the Galatians that he—Paul—is in travail—birth pangs—with them “until Christ be formed in them.” Like Jesus said, His followers are His mother . . . which seems to mean Jesus is born of all of us somehow, impregnated with the seed (“sperma” in Greek) of God the Father, Word of God the Father. Jesus born of you as mother—and born in you, formed in you, the Bethlehem of your heart.

That seems weird, yet it’s what we sing at Christmastime. “Oh holy child of Bethlehem descend to us we pray, cast out our sin and enter in, be born in us today.” It’s not just a song.

In I John 3, John writes that God’s seed (“sperma”) is in us who belong to Him. In the gospel of John, Jesus says to Nicodemus, “You must be born again.” We throw that phrase around so easily nowadays. I think we’ve come to believe that being “born again” is an easy, instantaneous process. But after having four kids I know it’s not such an easy, instantaneous process. The fertilization is rather instantaneous and easy. Maybe fertilization, receiving the seed—the Word, is the instantaneous, easy process, but pregnancy and delivery can really hurt and last a while! Maybe we should expect some born-again birth pains! Anguish.

The woman is in anguish to deliver. In fact, it’s such anguish, we really can’t do it. “We’re born of the spirit,” Jesus says, the Spirit of Jesus. The Word is the seed implanted in us, and we’re born together with Him. The me that’s born again is Him in me: “No longer I who live but Christ in me.” Christ in me is to live. He’s born of me in me — the new me.

In Matthew 24, Jesus sits His disciples down and talks of wars and rumors of wars; of earthquakes and famines. He calls them birth pangs. In Romans 8, Paul writes this: “The entire creation and we ourselves groan as in labor”—travail—birth pangs.

In Revelation 12, the woman—we—are clothed with sun, moon, and stars, clothed with creation. The creation is like our delivery room, creation and the woman “in anguish to deliver.” Jesus is born of you and in you . . . in anguish.

But you are not alone in your anguish.

In Philippians 2, we read that “Christ Jesus, in the form of God, did not count equality with God something to be grasped, but emptied himself by taking the form of a servant, being born in the likeness of men. And being found in human form, he humbled himself by becoming obedient to the point of death, even death on a cross.”

In Hebrews 4 we read: “For we do not have a high priest who is unable to sympathize with our weaknesses, but one who in every respect has been tempted as we are, yet without sin. Let us then with confidence draw near to the throne of grace, that we may receive mercy and find grace to help in time of need.”

Jesus said, “In this world, you will have tribulation. But take heart because I have overcome the world.” And He also said, “Behold, I am with you always, to the end of the age.”

So when you feel alone in your suffering and sorrows remember: He does know what it’s like. He really did empty Himself and take the form of a slave. He really is born of the woman in anguish. He really did wrap Himself in flesh like mine—and yours.

He really is Emmanuel—“God with us.”

So as you experience birth pains, remember He knows.

He feels what His Body feels.

We are His Body. He was born into His earthly flesh in Bethlehem of Judea, but He’s also born into our bodies. And that’s wonderful news because that means that we are known, and we are not alone!

This devotional was prepared by Kimberly Weynen, Peter Hiett’s assistant. It’s primarily compiled of a few devotional thoughts from Kimberly and excerpts from Peter’s three-volume commentary on the Revelation entitled Apocalypse Now (book 3).

*Also, we hope you join us in the New Year for more great messages. You can find all our sermons, devotionals, and more at relentless-love.org