Power That Changes the World 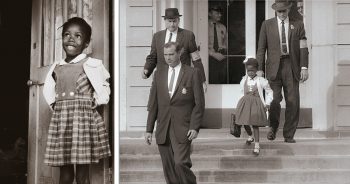 In 1960, a federal judge ordered the forced desegregation of New Orleans School District. Every day, six-year-old Ruby Bridges was forced to attend the William Frank Elementary School alone. Because all students were white and only Ruby was black, the white parents wouldn’t allow their white children to be there with Ruby.

The New Orleans police refused to protect Ruby so a federal judge ordered federal marshals to escort Ruby to and from school every day past a mob of angry white people yelling insults and threats.

Distressed by this, the federal judge called on a child psychologist, Dr. Coles, to fly to New Orleans and meet with Ruby on a regular basis. Dr. Coles was utterly mystified by six-year-old Ruby because she seemed so content, so happy, so blessed, and so free.

One day, Ruby’s teacher told Dr. Coles that she had observed something strange and rather troubling that morning. As usual, the four federal marshals were walking Ruby through the crowd but this morning she stopped and began talking. Nervously, the federal marshals had tried to get Ruby to keep moving, but she wouldn’t budge. She stood there looking at the crowd and talking. Suddenly, she finished and walked into the school.

Later, Dr. Coles sat Ruby down and questioned her about the incident, he said, “Ruby why were you talking to those people?” She looked surprised and said, “I wasn’t.” Dr. Coles replied, “Ruby your teacher saw you from the window. You stopped and she saw you talking.”

Ruby thought a moment and then said, “I wasn’t talking to them…I was praying. Every morning before I start my walk, and every afternoon, I say the same prayer. This morning I forgot to say my prayer, but when I saw those people I remembered and so I stopped and said my prayer. I pray for those people.”

Thinking he must be missing something Dr. Coles said, “Ruby…you pray for those people?” She said, “Yes.” He said, “You pray for the people in that angry crowd that say such mean things about you? You pray for them?” Ruby looked at the eminent Dr. Coles, got this confused look on her face and said, “Well…don’t you think they need prayin’ for?”

Dr. Coles asked, “What do you pray?” Ruby answered, “Every time I say the same prayer: ‘Please God, try to forgive those people, ‘cause even if they say those bad things, they don’t know what they’re doing. So you could forgive them, just like you forgave those folks a long time ago when they said those bad things about you?”

You see? “The immeasurable greatness of power,” true power was not being exercised by the New Orleans Police department, the angry crowd, or even the U.S. Supreme Court. The power with which Christ “subjects all things to Himself was operating and exercised in six-year-old Ruby Bridges.

It’s the slaves of Christ that change the world.
It’s the servants of Love that wield true power.

It’s not Sheriff Clark and his deputies on the bridge outside Selma Alabama . . .
It’s the worshipers that they beat with billy clubs as they knelt and prayed, and the nation watched.

It’s not the government of South Africa or Great Britain…
It’s Nelson Mandela, Desmond Tutu, and Mahatma Gandhi that change the world.

It’s not the Popes and Cardinals . . .
It’s Saint Francis and Mother Theresa, and slaves like Saint Patrick.

It’s not Barbarian hordes and foreign armies . . .
It’s Christians thrown to lions that undo the Empires.

It’s not the Roman Empire that holds true power . . .
It’s an old Jewish man named Paul, beaten, flogged, chained to a wall, and yet writing letters in that Roman jail.

It’s one naked, beaten, and battered Slave nailed to a tree, where all flesh will see Him together. And look: He’s speaking a prayer: “Father forgive them; for they don’t know what they’re doing.”

This devotional was prepared by Kimberly Weynen, Peter Hiett’s assistant. It is a compilation of excerpts from Peter’s sermon titled: “The Bible and Slavery” and devotional thoughts from Kimberly. To read, watch or listen to the sermon in its entirety click here: