Reading Signs and the Red Moon 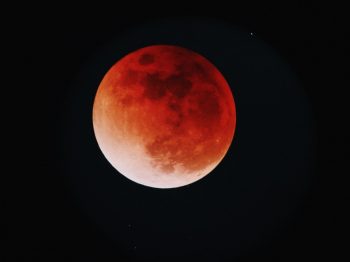 And the Pharisees and Sadducees came, and to test him they asked him to show them a sign from heaven. (“Heaven” and “sky” are the same word.) [Jesus] answered them, “When it is evening, you say, ‘It will be fair weather, for the sky is red.’ And in the morning, ‘It will be stormy today, for the sky is red and threatening.’ You know how to interpret the appearance of the sky, but you cannot interpret the signs of the times. An evil and adulterous generation seeks for a sign, but no sign will be given to it except the sign of Jonah.” So he left them and departed.

The Sadducees and Pharisees (that is the Religious experts on signs.) asked Jesus for a sign, which is profoundly ironic. Jesus had just fed five thousand people with five loaves and two fish and the twelve disciples collected twelve baskets of leftovers. Then Jesus left Israel and went to Gentile territory where He fed four thousand people with seven loaves and a few fish.

You know sometimes if you seize control of a sign or take just a piece of it, you can make it point in any direction you like and even change its meaning.

The included photo is what the ancients referred to as a “blood moon.” It’s a lunar eclipse. The moon turns red for the same reason the sky turns red at sunrise and sunset. Well, in Joel 2:31, the prophet Joel wrote: The sun shall be turned to darkness and the moon to blood before the great and awesome day of the Lord.
In the Revelation, at the opening of the sixth seal the sun goes black and the moon becomes like blood, as if the moon bleeds.

On the news, you may have heard about the recent series of four blood moons. It began on April 15th last year and the fourth of the tetrad comes on September 28th of this year. So some religious leaders have said, “Jesus will return on that date.” But because Jesus said, “No one knows that date,” other religious leaders say, “Well, something’s going to happen and it has to do with Israel. Because this blood moon is on Passover, support Israel by giving to my ministry, or voting for this candidate, or something bad could happen – like the Tribulation and Jesus could come back!”

Back to our passage of Scripture: It’s important to understand that the Sadducees were the ruling liberal elite of Jesus’ day and the Pharisees were the popular conservative leaders of Jesus’ day. They did not get along with each other except in this: Together they asked Jesus for a “sign from the sky” and together they enticed Israel to chant, “Crucify him. Crucify him.” Both groups claimed to be experts on the law and signs.

It’s fascinating that someone, in the Bible, who’s not an expert, tells us exactly what the “blood moon” means. He’s a fisherman, named Peter. In Acts chapter 2, when the Holy Spirit fills the tabernacle (that we now call the church), and they all start worshipping in the languages of the nations, Peter stands up and says, “This is what was uttered through the prophet, Joel: ‘In the last days . . . I will pour out my Spirit on all flesh’ and the sun shall be turned to darkness and the moon to blood before the day of the Lord comes and it shall come to pass that everyone who calls on the name of the Lord shall be saved.'”

Peter says, “This” is “that” and he seems to believe that they all saw what Joel prophesied: The sun turned black. (It happened from noon to 3 p.m. as Jesus hung on the cross). And there was a blood moon. Using Kepler’s laws of motion and computer calculations, astronomers now point out that there was one (and only one) lunar eclipse on a Passover Sabbath while Pontius Pilate was Governor of Judea, and it occurred on April 3, 33 A.D.

There are many other reasons to believe that Jesus was crucified that day (even including seismic data from the Jordan rift valley). That means that the witnesses to Jesus’ death saw the sun turn black – that day, and also saw a blood moon that night. The sun went black from noon to 3 p.m., when Jesus died. The moon rose that night in full eclipse. The eclipse began below the horizon at 3 p.m. as Jesus cried, “It is finished” and “delivered up his Spirit” “The life giving Spirit.”

Now just think about that. All the experts saw the signs, but none of them knew what they meant (at least not yet).
They crucified Jesus as the moon moved into the shadow cast by the earth. They crucified Jesus because they didn’t want the Light.
They didn’t like what He meant:
He loved the last and least.
He forgave his enemies (Canaanites and Romans).
He refused to support the violent political aspirations of the nation state of Israel because that’s not how his Kingdom comes.

“The sign of Jonah” is “Jesus Christ crucified” “descended into Sheol, (like Jonah) and risen on the third day.” Maybe if we get that sign we can read all the others.

You will be confused and, like Jesus said, “In this world you will have tribulation.” He doesn’t rapture us out of tribulation; He wrestles with us in the midst of tribulation. You know, if God is really the creator and therefore the Author of your story, you really only wrestle with one person in this life, and that person is the Word of God.

Well, the Word of God is not confused, but you might feel confused. So keep wrestling, – keep seeking, keep asking, “What does it mean?” “What does He mean?” Better, “What do you mean?” But, see? It’s never just loaves and fish, a moon in the sky, bread or wine.

So, when it comes to signs:
Pay attention.
Expect confusion
Keep asking what does it mean?
And then surrender your meaning to the Author’s meaning and receive new meaning.
And remember:
Love is not something you comprehend.
Love is Someone that comprehends you.

And, by the way, in Psalm 89: 37, God refers to the moon as His “faithful witness in the sky.” The moon faithfully reflects His light upon the earth. In Revelation 1: 5, Jesus is called, “the faithful witness.” So that paints quite a picture. April 3rd, 33 A.D., the experts in the law “puffed up with knowledge,” the “evil and adulterous generation” “seeking signs” crucified the meaning of all signs. They crucified the meaning and that is the meaning: You can’t stop the Word of God and the Word of God is grace. His life poured out will fill all things including “the evil and adulterous generation.” God writes the story and Jesus is His faithful witness. Jesus is “the blood red moon.”

This devotional was prepared by Peter’s assistant, Kimberly Weynen. To dig into these things further, click on the link to read the whole transcript and/or watch the sermon: Living in a Parable (The Signs of the Times)