Is There Room For Doubt In Your Journey of Faith? 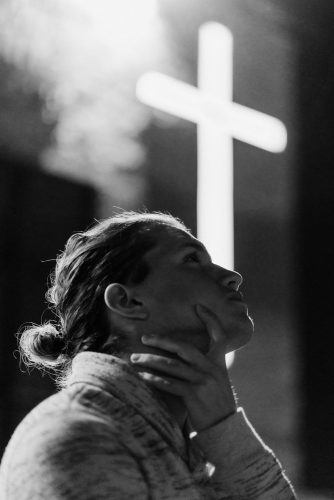 Have you ever wondered why God doesn’t make it abundantly clear that He is God? Why does He leave space for doubt and questioning of Him, of His existence or character?

When the Pharisees said, “If you’re the Christ come down from the cross,” why didn’t He? He could have come down off the cross and said, “See? I told you!” and then gotten back up and finished atonement. Why wouldn’t He? What if He had? Would they then have had faith . . . or something else?

It seems that all throughout scripture, all throughout history, God always seems to leave room for doubt. And if it appears there isn’t room for doubt, it’s like Jesus makes sure there is. (He only performed miracles for those who already had some faith.) It’s like wherever Jesus went, and wherever He goes, He goes out of His way to make sure that people don’t have to believe—aren’t forced to believe—yet He wants us to have faith. . .

How could we prove God?

Some people have said that because you can’t prove God, there is no God: “I’ll only believe what can be proved without a doubt…”

Descartes said, “I think, therefore I am.” (That’s not a proof.)

There’s a bumper sticker that says, “I doubt, therefore I might be.”

You see, whether you’re a materialist or a spiritualist, it seems we’re stuck with doubt as if God has built uncertainty into the very fabric of our reality. It appears that no matter how hard we try to turn the world into a machine and ourselves into computers, we can’t do it.

But back to our original question: is there room for doubt in our faith journey?
Let’s look at Matthew 11:2-3

“Now when John heard in prison about the deeds of the Christ, he sent word by his disciples and said to him, ‘Are you he who is to come, or shall we look for another?’”

John the Baptist doubted. And that’s amazing. John is Jesus’ cousin. He knew the miracle stories of His birth; he saw the Spirit descend as a dove upon Jesus; he heard in prison (according to verse 2) about the deeds (miracles) of Jesus. And if faith is a matter of being good enough or smart enough, John should have tons, for he is the pinnacle of “the law and prophets.”

And in Matthew 11:4-6 we read: “And Jesus answered them, ‘Go and tell John what you hear and see: the blind receive their sight and the lame walk, lepers are cleansed and the deaf hear, and the dead are raised up, and the poor have good news preached to them. And blessed is he who takes no offense at me.’”

Well, verse two told us John has already HEARD that Jesus does these things. See, this isn’t proof but word. Actually, in Isaiah 35 and 61, Isaiah prophesies the Messianic Age saying, “Then the blind will see, the deaf will hear, the lame will leap, good news will be preached to the poor, and the Messiah will proclaim liberty to the captives, the opening of the prisons.”

But you see, John is in prison. He must be thinking, “Cousin, this is great. The blind, the lame, the lepers . . . but I’m in prison. Where are you? They’re going to cut my head off!” You can relate to that kind of doubt, can’t you? “OK, Jesus, I believe with my heart that you’re the Messiah, but are you the Messiah for me? I’m hurting, and where are you?”

It’s like Jesus says to John, “Yes, I’m the Messiah (more than you ever imagined). I do set the captives free, and I am setting you free, but John, you must still suffer, and I must suffer. And blessed is he who takes no offense at me.”

Well, John doubts publicly, and now you’d think Jesus would just rip on John for doubting, but look at the next verse.

Matthew 11:7-11a “As [John’s disciples] went away, Jesus began to speak to the crowds concerning John: ‘What did you go out into the wilderness to behold? A reed shaken by the wind? Why then did you go out? To see a man clothed in soft raiment? Behold, those who wear soft raiment are in kings’ houses. Why then did you go out? To see a prophet? Yes, I tell you, and more than a prophet. This is he of whom it is written, ‘Behold, I send my messenger before thy face, who shall prepare thy way before thee.” Truly, I say to you, among those born of women there has risen no one greater than John the Baptist…’”

It’s like Jesus assumes we’ll all doubt.
It’s what we do with our doubt that matters.

John is honest about his doubts.

John exposes his doubts to the light.

Do you want Jesus to be the truth?
Perhaps that’s the real question. Think with me:

To really doubt what’s good, you have to believe in the Good.

To really doubt what’s real, you have to believe in the Real.

To really doubt what’s true, you have to believe in the Truth.

So to really and truly doubt Jesus, you have to believe in Jesus, the Truth.

So we’ve established that doubt can be a really good thing for faith, in some ways it can even be proof of our faith. But what about this verse? James 1:6 “He who doubts is like a wave of the sea that is driven and tossed by the wind. For that person must not suppose that a double-minded man, unstable in all his ways, will receive anything from the Lord.”

Well, to doubt nothing in this world is insane, but to doubt everything is more insane—for then you have nothing to doubt with. I think that’s the double-minded, doubting man that James talks about. The doubting man makes doubt an idol.

He doubts in order to protect himself from truth.

He doubts because he believes, and he doesn’t want to believe.

He’s trying to kill the truth—that is crucify Jesus and go insane.

But if you doubt because you kind of believe and want to believe the truth, then you’re seeking the Truth. The real issue when you doubt is not if you are smart enough (to understand and decipher the prophecies and the evidence) or good enough to believe; the real question is . . . do you want to believe?

If you want Truth, you’ll seek Truth, and in seeking Truth, you’ll find Jesus—THE Truth because He has already found you, and He’s helping you find Him too.

This devotional was prepared by Kimberly Weynen, Peter Hiett’s assistant. It’s primarily a compilation of excerpts from a larger sermon entitled “Room for Doubt, Room for Faith, and Room for Me.” You can read, watch or listen to that sermon in its entirety here: https://relentless-love.org/sermons/room-for-doubt-room-for-faith-and-room-for-me/