Running in the Wrong Direction 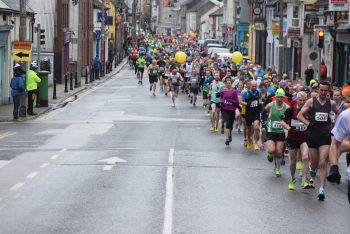 Have you ever noticed that it seems like everyone is in a hurry to get somewhere? It’s as if everybody’s running in a race, in one direction, for some finish line at the front. But what if the King and Judge of the marathon said, “HEY, you have all believed a lie. The finish line isn’t in front of you, it’s behind you!”That would be a paradigm shift. All at once, the first would be last and the last first!

If someone was running the opposite direction, He would be a “sign that is opposed.”

In Luke, Simeon prophesied that Jesus would be: “a sign that is opposed…so that thoughts from many hearts may be revealed.”

But for the people at the front (important and powerful people, self-righteous people), the news might not sound so good. But it WOULD be good; for if you’re running the wrong direction, you will never reach the finish line, no matter how hard you try. In fact, the better you run, the worse you are. And the harder you try, the further behind you get, and the more you would resent the Sign. In that case, the best gift would be for you to run yourself out until you were tired and old, and almost nothing, for then you might be ready to see the Sign and be grateful.

Well, it would be even better if the King and Judge not only told you that you’re running in the wrong direction but showed you how to run in the right direction! And he did! And he was planning it all along. Prophets prophesied about it and Scripture tells us about it.

Here’s an example where Zechariah prophesied about it: “They will look on me, the one they have pierced… (says the Lord) On that day, a fountain (like a river) will be opened to cleanse them from sin.”

Wow! “Behold the Lamb of God who takes away the sin of the world.” –Who becomes last and least because… He WANTS to!

If I slow down long enough to see it, to see him, I see that God is love, and love is kickin’ my butt. Love is kickin’ everyone’s butt: “For all we like sheep have gone astray, everyone running his own way, and the Lord has laid on Him the iniquity of us all.”

What/Who are you running for today?
Whatever the case, know that Love is running toward you!

This devotional was prepared by Peter’s assistant Kimberly Weynen. To dig into these things further, click on the link to read the whole transcript and/or watch the sermon: Simeon