The Seed in the Midst of Dirty Scandals 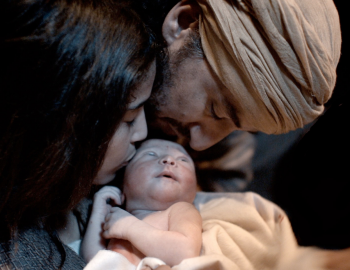 Christmas is close! It’s just weeks away. And I keep having that song in my head, “It’s beginning to look a lot like Christmas… everywhere you go.” But then I stop and I think, ” Is it?” I think about the news: the scandals, the wars, the shootings, the greed, the lust, and the selfishness . . . Does it really look like Christmas? It looks more like a mess. I mean Christmas is sacred and our society is so profane. Our society seems immersed in filth. Can Jesus really be in the midst of such a mess?

Well, let’s look at part of the Christmas story in the Bible. Maybe that will help get us in the Christmas spirit. Matthew 1:1 – the first verse of the New Testament: The book of the genealogy of Jesus Christ, the son of David, the son of Abraham. [That’s important because in Genesis 12 God promises to bless Abraham and through him and his seed “ALL the families of the earth,” and Scripture tells us that seed is Jesus.]

In this long list of men, Matthew lists five women.

All this took place to fulfill what the Lord had spoken by the prophet: “Behold, the virgin shall conceive and bear a son, and they shall call his name Immanuel” (which means, God with us).

So, Jesus is born of God and of this long list of people that somehow carry the blessing or “seed” of Abraham. And out of all these men, Matthew points out four women. Not Sarah, Rebekah, Rachel, and Leah – the traditional Jewish matriarchs – but Tamar, Rahab, Ruth, and Bathsheba, and then finally Mary!

You can read about the first woman, Tamar, in Genesis 28. This young woman was married to a wicked husband who died a violent death. She immediately slept with her husband’s brother who abused her and he died a violent death also. She then became so wanton that she disguised herself as a hooker, went to a seedy part of town, and seduced the father of her two dead lovers. He paid to have sex with her – not knowing it was her. Three months later someone told him, “Your daughter-in-law is a prostitute and not only that, she’s pregnant.” Her father-in-law planned to burn her to death, with the baby, until she revealed that he was the father of the child.

Rahab is literally the name of the “Dragon of Chaos” in the Old Testament. And Rahab was a Canaanite prostitute who was immersed in the occult and lived in Jericho. The Israelites were to destroy the Canaanites but could never seem to finish the job, at least not with swords, bows, and arrows.

Ruth was from Moab, present day Jordan and Israel’s ancient enemy. She was an immigrant, desperately poor, and so desperate for a man that she snuck into a man named Boaz’s room, and laid at his feet until he took her. Boaz took her, becoming her “kinsman redeemer.”

Bathsheba was married to a good man but exposed herself to another man: a famous musician and friend of her husband. The musician (King David) took her, impregnated her, and then had her husband murdered just to cover his tracks. The woman gave birth to a baby boy and the baby died. Immediately, she conceived another baby boy by the same man. This boy lived, but I bet you’d have to have wondered about a boy raised in a household like that.

The last woman, Mary, was a poor, oppressed, unwed, pregnant teenage girl. You know she was a righteous woman, but she didn’t appear very righteous that first Christmas Eve.

Well, that’s Jesus’ family tree. And Matthew is pointing out it’s extremely profane, yet Jesus is thoroughly sacred. . . and yet it leads to Jesus’ birth. It’s full of scandals, broken soil and excrement—and Jesus . . . the imperishable Seed.

Maybe if we insist on a clean and tidy world, we won’t be in the place of the Seed’s appearance. The Promised Seed began to grow in a place called Nazareth: “Can anything good come from Nazareth?” (John 1:46). He was born in a barn (dirty and stinky), in a feeding trough, to an unwed mother who was not considered worthy to receive a bed. In order to see life springing up from the Seed, you have to be willing to deal with some dirt.

Do you realize that according to religious law in that day, each one of those women in that list might be executed or at least banished?

Rejected, raped, bought, and sold—outcast, exiled, dejected and despairing—profane, imagine how they must’ve wondered: “Is anything sacred?” “Is there a God?” And “Does He hate me? And if He exists, where is He?”

Maybe you’ve felt like one of those women—rejected, used, unwanted, despairing—like broken, dirty soil for whom there’s no hope. Maybe you look at our world and think: “What a mess! There’s no hope!”

Jesus is called “Son of God” and “Son of Man.” That’s humanity – that’s you—that’s us. And Jesus taught that anyone who does His Father’s will is His mother.

And behold: Tamar, Rahab, Ruth, and Mary carried Him like a seed in their own womb—a Seed planted in dirty soil. With God, there’s always hope—even in the messiest of situations. “Where sin increased, grace abounded all the more” (Romans 5:20). “…In our weakness…His faithful love endures forever (Psalm 136:23). After eating the forbidden fruit, God tells the serpent that Eve’s seed will crush his head (Genesis 3).

Maybe He’s closer than you think, and when you receive Him into your brokenness and the messiness of life you actually give birth to Him.

This devotional was prepared by Kimberly Weynen, Peter Hiett’s assistant. It’s a compilation of excerpts from Peter’s sermon entitled “Mangers” and devotional thoughts from Kimberly. To read, watch or listen to the sermon in its entirety click here: “Mangers”