The Anxiety—And Hope —Of Forgiveness 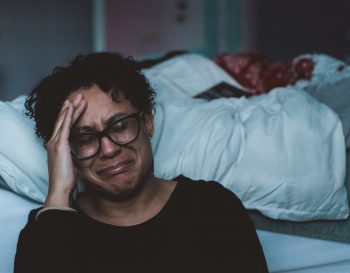 “In him we have redemption through his blood, the forgiveness of our trespasses…” (Eph. 1:7a)

1. Try to think of the worst, most embarrassing sin you’ve ever committed. Got it? In the name of Jesus, you are forgiven. You cannot make up for it; you cannot fix it, you cannot pay for it. It’s already been paid for.

2. Now, think of a sin you’re afraid you might commit in the future. In the name of Jesus, if you commit it, you are forgiven.

3. Think of the worst sin someone has committed against you. In the name of Jesus, they are forgiven.

4. Think of the worst sin someone could commit against you. If they commit it, in the name of Jesus, they are forgiven.

Now, how do you feel?

My guess is that in the first instance, you felt really good . . . but maybe a little offended when I said, “You cannot pay.”

In the second instance (forgiven for sins you haven’t yet committed), my guess is that it felt good . . . but you started to worry. Maybe you thought, “If I’m not threatened with punishment or promised a reward, I’m afraid I won’t choose the good . . .”

Well, anyway, forgiveness probably made you anxious, anxious that you might lose control of yourself.

By the third instance, you probably were angry: “How can God forgive them? They sinned against me!” Or maybe after the third instance, you thought, “That’s not fair! People should pay, and people should get what they deserve.” Well, what does anyone deserve? What could they deserve it with? And what could they pay with? What could one give that hasn’t been given?

By the fourth instance, perhaps you were terrified that God does not take sin seriously and thus terrified of sins that might be committed against you, if you lived a life like that—proclaiming forgiveness.

I mean, if someone took your cloak, you wouldn’t prosecute; you’d give them your coat as well. If someone struck you on one cheek, you’d turn the other to them. If you lived like that, you’d get yourself crucified. You might-as-well pick up a cross and carry it around. And maybe you thought:

“If God doesn’t change this world through threats of punishment and promises of rewards, how will it ever change?”

“If God doesn’t punish us for spilling His own blood, how’s He going to keep us from spilling more blood?”

Well, I just want to point out to you that the proclamation of forgiveness is like judgment: it fills us with this outrageous hope and abject terror. Psalm 130:3-4: “If you, O Lord, should mark iniquities, O Lord, who could stand? But with you there is forgiveness that you may be feared.”

Do you know what that word “forgive” or “forgiveness” means in the Bible? In Greek, aphiemi is the verb, and aphesis is the noun. It literally means “to let” or “let go” or “release.” So it really doesn’t even matter if I know exactly what’s a mistake and what’s a sin. It doesn’t matter that I’m not able to judge my world or myself. I can just let it be.

Ultimately, I have to…let it be. Let the sins of others be. Let my sin be. If I think that I save myself from my sin, I can’t be saved from my sin. For my sin is thinking I am the savior. Ultimately I have to let my sin be…

Do you let the Creator create, or must you accomplish all things according to the council of your own will, as if you were the creator? You know if God is the Creator, and you are His creation, then everything is grace and you can’t pay for anything and neither can your neighbor! Biblically speaking, everything is forgiven you, and you must let it be.