The Incarnation of God 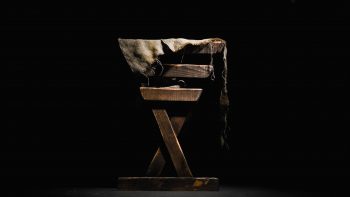 If you’ve ever seen someone born, you know it is a humiliating experience. And He was born in a barn–with flies, manure, smells, and animals. He was born to peasants. Shepherds were there, and they are slobs. It was a mess, and it hurt.

And when He was born, they took God and wrapped Him in swaddling clothes and they laid Him in a food trough! From my personal experience on farms, a food trough is one of the grossest things of all on the farm. The food troughs I’ve seen had grain in them, and the sides were coagulated with dried cow fluids, feed, flies, and stuff like that. That’s mind-boggling!

I worry we have been so inoculated with small doses of our faith–with those little Hallmark nativity scenes; everything is so nice and pretty and cute. There’s no manure, flies, or smells. They don’t look a thing like a real barn.

The incarnation: God, Author of life, King of Kings, the Prince of Peace….In a food trough crying for his mother’s milk.

And God remained incarnate with us 33 years! What is so utterly shocking about Jesus is He’s so utterly unshocking. He’s so normal! That’s what the Pharisees had a problem with. He hung out with tax collectors and sinners. They called Him a glutton and a drunkard.

The incarnation is, I think, a scandal.

Our cults, our nativity scenes, our Jesus movies don’t show that–you know the ones: Jesus walks around, and all He does is quote Bible verses in the King James version. He floats. He never says, “Hey guys, I’m hungry. Let’s go get a sandwich,” or “I gotta use the restroom, I’ll catch up with you later.” But, you know that’s true!

We think it’s better that He’s some strange thing we leave at church, and who doesn’t have much to do with the rest of our lives, and the way we love people, and the way we spread the gospel.

Just as Jesus became incarnate, Paul became in-Greek-ate, In Acts 17, the apostle Paul, while in Greece, finds an altar to an unknown God and, in a very Greek way, he shared the gospel. He didn’t quote any Scripture. He quoted Epimenides, a pagan. He spoke favorably of their religious quest rather than putting the pagans in their place. He used Greek terms and a Greek style of preaching, rather than Hebrew. He spoke about the altar to the unknown god rather than speaking about the Lamb of God that was slain.

The speech Paul gives in Acts chapter 17 is probably the most controversial passage in the book of Acts. But Paul’s doing what he explains in his letter to the Corinthians—he’s living out one of the most spectacular doctrines of the Christian faith–the incarnation.

And I believe that you and I are called to become in-something-ate.

Paul writes this in 1 Corinthians 9:19, “I have become all things for all men so that I might, by all means, save some.” We don’t question that he said it, but we’re amazed that he did – that he could claim so much common ground with these pagans, that he could talk like them in their language, use their images, and their philosophies, and speak in their manner of speaking.

I think this passage is so controversial because when we, “believers” look at it, Paul even called them brothers. And we might think: “What’s he doing? betraying our club?”

Of course! Just like Jesus betrayed the Pharisee’s club.

If all we are is a club where you pay your dues, know the secret passwords, wear the special uniform, we’re missing Jesus. We have our own evangelical, pop, Christian culture.

We’ve developed a whole subculture that’s not necessarily prescribed by Scripture. We hang on to it and we wrap ourselves with it–and that’s not necessarily bad. Some of those things are really good at times, and helpful, but when we get our subculture mixed up with our faith, it’s idolatry. We end up worshiping our culture rather than our Christ.

Jesus became incarnate for us, Paul became in-Greek-ate for them to communicate Jesus.

And like Paul, we’re called to become in-something-ate, and that something depends on whom you’re trying to love.

Most of the time we selfishly want people to come into our world, and learn our culture, and then we’ll tell them about our gospel. But we’re called to become incarnate–not just acting but entering.

The real difference is this: “love, joy, peace, patience, kindness, goodness, gentleness, faithfulness, self-control against such there is no law.”

What is that?
The fruit of the Spirit! The Spirit!
The person of Jesus alive in us wherever we go–
God incarnate–a radical difference but a radical identification.

This devotional was prepared by Peter’s assistant Kimberly Weynen. It is a compilation of excerpts from the sermon titled “Christmas at LMCC.”