THE RICHES OF GOD’S GRACE 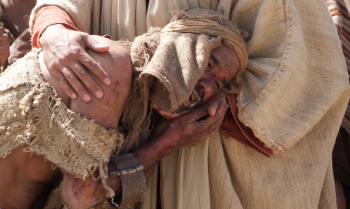 Is grace something that we have to earn or is it truly a free gift? In Ephesians we learn that we are redeemed and forgiven according to the riches of God’s grace, but how rich is God’s grace? Sort of rich? Pretty rich? What’s the limit of God’s grace? Does it run out?

Is it enough to forgive you for ninety-two years of sinning, but at ninety-three God says, “Enough is enough! You used up my grace. I have no more grace, no more patience?” Also, is that grace for everyone, and if not who is it for?

Let’s read Ephesians 1:7-8 and see if it gives us any insight into those questions:

“In him we have redemption through his blood, the forgiveness of our trespasses, according to the riches of his grace, which he lavished upon us, in all wisdom and insight making known to us the mystery of his will, according to his purpose, which he set forth in Christ as a plan for the fullness of time, to unite all things in him, things in heaven and things on earth.”

IN HIM we have “redemption…and forgiveness of our trespasses according to the riches of His grace, which he lavished upon us…to unite all things in him.” (When you have the ability to lavish something on someone—or many someones, there must a be a lot of it—especially if there’s enough to unite ALL things in Him.)

Forgiveness depends on HIS grace— not your choice or your repentance, sorrow or remorse. (So it appears it can’t be bought. It truly is a free gift)

And who and what is that grace for? “to unite ALL things in him, things in heaven and things on earth.”

In Greek, “all” means “all.” There are some words that are very hard to translate out of Greek, words that get translated as “eternal” or “ever” or “age” or “hell” or “judgment” or “condemnation.” But “all” is a very simple concept. All is all.

So God’s grace is rich enough for choosing, redeeming, forgiving and unifying all things in Him—“things in heaven and things on earth.”

If God unites all things in Christ, it sure sounds like all is forgiven in Christ. And this was—and is the plan for the fullness of time, from the foundation of the cosmos.

Space and time (chronological time) are created realities. So, if you were chosen in Christ before the foundation of the cosmos (as Ephesians 1:4 states), before the Big Bang, that means God chose to forgive you in Christ at least 14 billion years ago (as we measure time). He chose to forgive you 14 billion years before you chose to sin. And He hasn’t forgiven some of your sin; He has forgiven all of it. It was all nailed to the cross in Christ Jesus, and that was the decision, the plan, from before the foundation of the world.

It’s not like He’s disappointed. We are the ones that get disappointed, who have false expectations. But God expects far more failure from me than I expect from myself. God is not disillusioned with me because He never had any illusions about me

He doesn’t say, “Oh my goodness, I can’t believe Adam and Eve ate from the tree!”

“I can’t believe Israel nailed the Messiah to that tree!”

“I can’t believe (insert your name) sinned! Never in a thousand years would I have imagined he’d/she’d do that! I’m so disappointed.”

No. From the foundation of the world, He chose to forgive my sin, all my sin, all your sin, and it’s not just in Ephesians. See for yourself:

So, I want you to think of the worst sin you can remember committing, the sin you’re most terrified you’ll commit, or the sin you keep committing and just can’t seem to stop committing.

Now, please hear this: Jesus took the bread, and He broke it saying, “This is my Body given to you. Take and eat.” And He took the cup saying, “This is the new covenant in my blood poured out for the forgiveness of sins.”

You cannot purchase grace. You are saved BY grace through faith, and even that faith is grace. It’s God’s good will born into the womb of your bad will. It’s Jesus born in your manger and rising in your tomb. It’s His blood in your body. Saint Paul wrote, “It’s no longer I who live but Christ in me.” And that happens at the communion table and it happens at the tree—the cross.

So accept His gift of grace, lavishly given to you, and believe the Gospel!

In Luke 7 Jesus reveals that the one forgiven much loves much. . .

God is love, and He wills that we would love much.