The Shield of Faith. Taking It Up and Extinguishing Flaming Darts of the Evil One 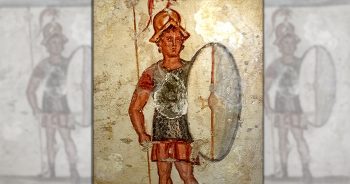 Therefore take up the whole armor of God, that you may be able to withstand in the evil day, and having done all, to stand firm. Stand therefore… having taken up the shield of faith, with which you can extinguish all the flaming darts of the evil one.

I think Paul is saying that all the armor is faith and that “faith” is a thureos, which comes from the word thura, which means door, a shield that’s also a door or the size of a door. The thureos was about the size of a door; it wasn’t the small shield that the Roman soldier might carry on duty, so the soldier didn’t move the shield to block individual arrows. With the thureos, Roman soldiers would form a phalanx—a moving fortress, and then advance on enemy territory. Actually, all the armor of God is for advancing and never retreating. Roman armor didn’t cover your backside. So, if someone was kickin’ your backside, it meant turn around and fight.

With the thureoi, the Roman army would advance on enemy territory. The greatest threat to that army was the flaming arrow, so the Romans coated the thureoi in leather and soaked them in water before they went into battle so as to quench the flaming arrows on contact. Paul wrote, “In all having taken up the thureoi of faith…”

But what is faith? I think we’re a bit confused about that. In the twentieth century… some actually argued that faith was the opposite of reason, but Jesus is The Reason, The Logos, The Truth. We are to have faith in “The Reason.” Some have thought you get faith by taking knowledge, but in the Bible people often take knowledge so they won’t need faith. We think: “If I know enough about God…I won’t have to trust God. I can trust my knowledge of God and manipulate God.”

I believe biblical faith is not our ability, and that’s what makes it so hard to talk about: It’s ours–we have it, but the moment we’re proud of it it’s not faith, and we don’t have it. Biblical faith is trust in another Person’s judgment; it’s actually faith in God’s Judgment.

Jesus is the author of our story. Jesus said, “I am the beginning and the end.” Jesus is the meaning of every moment–Jesus is the plot. In Hebrews 12:2 we read that Jesus is also the “author and finisher of our faith.” Literally, the “beginner and ender” of our faith. The opposite of faith is sin. Sin is trying to seize control of this ride we call life.

At the cross eternity invaded temporality, and meaning invaded chaos. At the cross, the Word was spoken into our void, making our merry-go-rounds part of His ride—His story: “Where sin increased grace abounded all the more.” If we trust that, “the plan for the fullness of our time,” if we trust Him–Emmanuel—God with us on this ride, we can laugh at the flaming darts of the evil one and enjoy the ride!

So Paul wrote, “In all having taken up the shield of faith with which you can quench all the flaming darts of the evil one.”

But what are the flaming darts?

Well, devil literally means “accuser,” and Jesus said, “He is the father of lies,” and he lies “according to his nature,” like he himself is a lie. And scripture records some of His lies, and they really are flaming arrows.

Here are just a few:

In Genesis chapter 3 he appears as a snake and shoots his arrows at the woman. It’s a bit surprising to see how much truth is on those arrows. I mean, their eyes were opened and as the devil said, they were “made like God, knowing good and evil.” God even agrees at the end of chapter three and says, “Look, they have become like us, knowing good and evil.” Yet they did die: “The day you eat of it, you will die.” That’s the sixth day, the evil day. Yet the lie wasn’t really even verbalized. The devil made an accusation which was true: “You’re not like God,” and then the devil suggested a solution: “Take knowledge and seize control; make yourself like God,” and it was all based on an implied lie, and this is the lie: “God is not trustworthy.” That’s the lie.

Next, in biblical history, the devil tempts Job, and God lets him, for God desires a champion: One who will trust God though it seems he’s been forsaken. Job’s world falls apart, and then the arrows come through His religious friends’–accusations: “Job you’ve failed,” and suggestions: “Job, this is how you gain control.”

Well, satan tempts Jesus with knowledge of the truth. But satan hates the truth. He tempts Jesus to seize control rather than surrender control to His Father. Next, satan speaks through Peter. Right after Jesus commissions Peter and calls him: “the rock on which I’ll build my church.” Peter says, “Jesus you can’t suffer and die,” and Jesus says, “Get behind me Satan.”

So the flaming arrows can come through talking snakes, calamities, and religious friends, and even your best friend, like Peter. They can even come in the form of scripture and anxieties in your own head. They will contain truths and yet not be true… At the root they’re all the same: A bit of truth like: “You sinned,” and then the lie: “God can’t be trusted, so you better seize control of the ride. You better trust your own judgment.”

The Old Testament reveals that every child of Adam seized control of the ride and trapped themselves in a prison of pride, shame, and fear…until the last Adam, God’s Champion–the Son of David–our High Priest remained faithful unto death… such that even though He bore the sin of the world, even though He had descended into our hell, even though He didn’t know why He felt forsaken, He cried out to God and surrendered His Spirit. He is the first Adam to be faithful…unto death…and the “firstborn from the dead–firstborn of all creation.” In Colossians 2 Paul tells us that in Christ’s death and resurrection, God disarmed the forces of evil, and “we were buried with him in baptism and raised with him through faith.”

In Galatians 2:20 Paul writes, “I have been crucified with Christ. It is no longer I who live but Christ who lives in me, and the life I now live in the flesh I live by the faith OF the son of God who loved me and gave himself up for me.” It’s like faith in Paul was the life of Christ in Paul or covering Paul.

Imagine the flaming arrows fired at Paul.
Accusation: “Paul, you persecuted the body of Christ in the name of God.”
“Paul, you are the chief of sinners.”
(Is that true? Well, yes, it’s scripture, written by Paul.)
Suggestion: “You ought to judge yourself, curse yourself, shut up and die.”

Yet….these flaming arrows were quenched because Paul saw something–he saw Someone. He saw that Jesus had already been cursed on his behalf and that God, His Father, was in Jesus, reconciling the Cosmos to Himself. He saw that God is love and God is a consuming fire, and flaming darts are no problem for consuming fire. He saw that Jesus Christ crucified and risen from the dead is God’s Judgment. Jesus said, “Now is the judgment of this world.”

We can’t fully explain God’s Judgment, but we can see God’s Judgment:
“Greater love has no man than this that he lay down his life for his friends.”

And you see, the flames can’t burn where they’ve already burned. Jesus is the armor of God that will not burn. (Flaming darts can’t hurt the one who dwells in eternal fire.)

You won’t be burned by satan’s judgments if you trust God’s Judgment.
Faith is not your ability. Faith is trust in Another’s Judgment.

For too long we’ve been speaking satan’s lies and creating theological merry-go-rounds of fear. We say, “You’re saved IF you decide to be saved…from your bad decisions” or “You might be saved IF God decided to save you from your bad decisions, and you’ll know if He’s decided to save you because you’ll decide that He has decided.” NO! God’s decision is eternal, and God’s decision is Jesus. God’s Judgment is salvation, and our judgment is damnation.

BUT . . .
Good News: God’s Judgment saves me from my own judgment.
Good News: God is in control of this ride.
When I see that and hear that, I have faith; I let go; I lose my life and find my life!

So, when the flaming darts start coming your way, look to Jesus crucified and risen from the dead. People may quote scriptures that fill you with fear, but look at Him, Jesus is the Plot.
People may say all sorts of things about Him, but you know Him.
Look at Him . . . look at how He loves you, and He’s risen!
See? People may teach you to run from God’s Judgment, but look at Him, He is God’s Judgment, and “IT IS FINISHED.”