The Sword of the Spirit. Will You Receive It & Wield It? 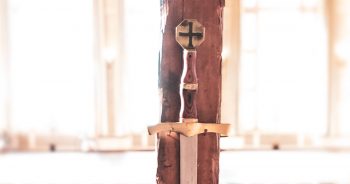 From his prison cell, chained in stocks, slandered, reviled, beaten, outcast and abandoned by too many to count, Paul writes,

Put on the whole armor of God, that you may be able to stand against the schemes of the devil. For we do not wrestle against flesh and blood, but against the rulers, against the authorities, against the cosmic powers over this present darkness, against the spiritual forces of evil in the heavenly places. Therefore take up the whole armor of God, that you may be able to withstand in the evil day, and having done all, to stand firm. Stand therefore, having fastened on the belt of truth, and having put on the breastplate of righteousness, and, as shoes for your feet, having put on the readiness given by the gospel of peace. In all circumstances take up the shield of faith, with which you can extinguish all the flaming darts of the evil one; and take (or “receive”) the helmet of salvation, and receive…

And now . . . after all those pieces of defensive armor, at last, Paul gets to something truly offensive: the sword of the Spirit, which is, the word of God…

Now, if you’re like me…you might think: “A word? Just a word? That’s our offense?”
But what is the “word of God?” Maybe it’s much more than we think!

Most folks think that the “Word of God” is the Bible. The Bible may communicate the Word of God, but it can’t be the same thing as the Word of God. When the term: “Word of God” was first used, there was no Bible to which it could refer. When Jesus referred to things that we now call the Bible, He usually used the words graphe—wrting or nomos—law (the first five books of the Old Testament).

So, the Word is actually Jesus, and Jesus is what God is, and says, and does. He is the Word that does not return void but accomplishes that for which He was sent (Isaiah 55:11).

And “The Word became flesh and dwelt among us…” And an angel said to Mary, “You will call his name Jesus.” The name means: “God is salvation.” God is Love and Jesus is the Word of Love. And an angel said to the shepherds, “I bring you good news of great joy that will be for all the people. Unto you is born this day… a Savior, who is Christ the Lord.

Now, the word that Paul uses for “word” in Ephesians 6, is rhema: “Receive the sword of the spirit, which is the word—rhema of God.” Rhema means word . . . but not just any word . . . it’s the Word of God—the Logos—spoken for a particular situation.

And Jesus said, “The words— rhemata—which I have spoken to you are Spirit and life.” He is the Logos and He speaks rhema. The Logos and the rhema are a gift for all. And Paul writes: “Take (receive) the sword of the Spirit, which is the word—rhema of God.”

I think you know what I mean: you’re with a friend, or at a family dinner, or maybe at work, and in the course of conversation you think: “Hey I ought to mention Jesus,” but you don’t . . . or maybe you’re concerned for your kids, your parent, your neighbor, and you think they need to hear God loves them, but you hide the sword.

Why don’t we wield the sword? Why don’t we speak the Word of God?
Well, maybe it’s because we doubt that it is “living and active.”

You know, Paul was a Pharisee of Pharisees.  Paul was part of the group that crucified the Word and sought to make sense of the Word by working, judging and seizing control . . . until the Word ambushed him on the road to Damascus. The Word judged Paul, recreated Paul, and then became incarnate in Paul.

And maybe that’s also part of why we don’t like to speak the Word, because He goes to war with weapons that we can’t understand (without the help of His Spirit). The Logos of Love isn’t our idea or logic. Actually, the Logos and rhema of Love judge human logic: “The word of God is living and active, sharper than any two-edged sword, piercing to the division of soul and of spirit, of joints and of marrow, and discerning the thoughts and intentions of the heart. And no creature is hidden from his sight, but all are naked and exposed to the eyes of him to whom we must give account” (Heb. 4:12-13).

The Logos and rhema of Love first judge us but also romance and transform us—even all humanity—into His followers.

Then I saw heaven opened, and behold, a white horse! The one sitting on it is called Faithful and True, and in righteousness, he judges and makes war. His eyes are like a flame of fire, and on his head are many diadems, and he has a name written that no one knows but himself. He is clothed in a robe dipped in blood, and the name by which he is called is The Word of God.

The armies of heaven…were following him on white horses. [Read the Revelation and I think you’ll see, that’s us following the Word of Love!]

From his mouth comes a sharp sword with which to strike down the nations, and he will shepherd them with a rod of iron. He treads the winepress of the fury of the wrath of God the Almighty.  On his robe and on his thigh he has a name written, King of kings and Lord of lords. Then I saw an angel standing in the sun, and with a loud voice he called to all the birds that fly directly overhead, “Come, gather for the great supper of God, to eat the flesh of kings, the flesh of captains, the flesh of mighty men, the flesh of horses and their riders, and the flesh of all men, [Did you catch that? ALL MEN! That’s you, and that’s me, and everyone else: ALL MEN . . .] both free and slave, both small and great.” And I saw the beast and the kings of the earth with their armies gathered to make war against him who was sitting on the horse and against his army.”

HE is The Word of God, and what’s He doing? He’s working! He’s making sense of this world! Remember what Jesus said in the gospel of John: “All judgment has been given to the Son,” and He said, “I judge no one, but if I judge, my judgment is just.”

He’s the Judge that judges by not judging: He Himself is the Judgment. And His Judgment is love . . . for all. “Love is strong as death, jealousy is fierce as the grave. Its flashes are flashes of fire, the very flame of the LORD” (Song of Solomon 8:6).

We might ask: “Why does it seem so weak at times, and why does it seem to die? Well, because He not only conquers the devil and all things; He came to conquer your heart, and He does. The Word of Love conquers hearts. The Word of God slays all flesh, including the flesh of the one that speaks it. So, if you speak The Word, if you wield the sword, don’t be surprised when you find yourself despised, and rejected, and hated by all for His name’s sake; don’t be surprised if it feels like it’s not “working.” Remember, your job isn’t to make it “work;” Paul simply says, “receive it.”

So, how do we receive it? By trusting the Word of God—the Word of Love. When you trust God’s Word of love for you, that love inhabits your every word. Your words become living words and every word becomes Jesus—the Life; every word is a word of Love, a word of God.

This devotional was prepared by Kimberly Weynen, Peter Hiett’s assistant. It is a compilation of several devotional thoughts from Kimberly and some excerpts from Peter’s sermon titled: “Just a Word.” To read, watch or listen to the sermon in its entirety click here: Just a Word