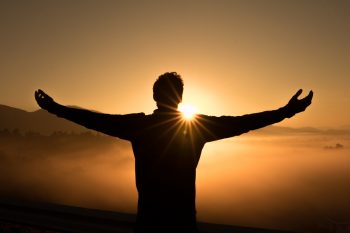 For years and years, we as humans have been trying to understand what truth actually is. A long list of philosophers from our time and times past have tried to define it, nail it down, and comprehend it. They’re all at least partly true, but, in one way or another, in the end, they all seem to come up short.

You see? No matter how hard we try, we really struggle to define truth. And that makes sense because if we did define truth, how would we know that our definition is true? We can’t comprehend what truth is because truth is the way we comprehend that anything…in fact…“is.”

So we know it’s out there, but what is it? What is truth?

Well, what if truth isn’t a thing but a Who?

On the night He was handed over for crucifixion, Jesus said, “I am the way, the truth and the life.” In the morning, Pontius Pilate asked him, “What is truth?” and Jesus gave no answer. Perhaps He gave no answer because He is the answer, and He was giving Himself.

What answer could Jesus give that Pontius Pilate would believe or that we would believe?   If He said, “I am the Truth,” how would Pilate know it was truth? And if Jesus, the Person, is the Truth, the question: “What is the truth?” is rather unanswerable because a “who” is not a “what.” And the Truth is a “Who” not a “what.”

Well, if Jesus is the Truth . . . that literally changes everything.

It means we don’t create or define truth. . . rather, Truth creates and defines us . . . just like Scripture says: “In the beginning was the Word (the Logos, the Logic, the Reason, the Meaning) and the Word was with God and Word was God.” He was in the beginning with God. “All things were made through Him.” (John 1:1-3) “He sustains the universe with His Word” (Hebrews 1:3)…

And if Jesus is the Truth that also means we don’t possess Truth.

The Truth—Jesus, God’s Word of Love spoken for all creation—is a gift for all, just like the angel declared at Jesus’ birth: “Behold, I bring you good news of great joy that will be for all the people.” Truth isn’t a possession; it can’t be owned; it is a free gift that belongs to all.

There is only one Truth, and Jesus is the Truth. That must mean any truth is Jesus, and the truth in anything is Jesus.
He is the Word that created all things and sustains all things and is for all things.

In John 1:9 He is called: “the true light, which enlightens all men.” No one group owns the Truth. So when we preach the gospel, …we ought to preach like Paul did to the Romans saying, “The Word is near you, in your mouth and in your heart.” (That is the Word of faith that we preach, the Word of Jesus.) Or we should preach like Paul did in Athens, in Acts 17 when He speaks to the pagan philosophers saying, “God is actually not far from each one of us, for ‘in Him we live and move and have our being’ as some of your poets have said, ‘for we are indeed His offspring.’”

Paul believed that Jesus the Truth had arrived in Athens long before Paul set foot in Greece. He didn’t bring Jesus to Athens like his own possession. He just pointed to Truth already in Athens and said, “I know His name. Trust in His name.

In order for us to comprehend Truth . . . Truth must first comprehend us.

Whenever anyone (Christian, Buddhist, Scientist) “discovers” Truth, what’s really going on? God’s saying, “Hello.” We do not really comprehend Truth; Truth is revealing itself to us. In other words, we can’t capture Jesus and nail Him down. The only way that could happen is if by some outrageous miracle He let us. He said, “No one takes my life from me; I freely lay it down.”

Actually, that miracle did happen, over two thousand years ago when God, in human flesh, in Jesus, laid down His life for all humanity. And it’s the greatest of all revelations: “There is no greater love than this, that a man lay down his life for his friend” (John 15:13).

But why would the Truth let us do that?

Well, maybe because, as we said earlier, the Truth is a Who (He is relational) and not a what. He longs to set us free from lies about the Truth—about who He is. He longs to set us free from our doubts and fears so that we can be comprehended by Him and maybe one day start to comprehend Him. And maybe God knew, that in order for all of that to happen, we needed to see where following the doubts, fears, and lies would lead. Maybe God is in the process of setting us free from the lies that tell us we are not loved by God.

At the end of his life, Einstein remarked: “Now I see that the only question is, ‘Is the universe friendly?’ I have begun to discover its physical meanings, but the question that haunts me is, ‘Is it friendly?’” In other words, Einstein was asking: “Is Truth friendly?”

I wonder if anyone ever said to him, “Hey Albert, did you know that Jesus said, ‘I am the Truth,’ which would mean, Truth died for you so that you could comprehend the Truth and be comprehended by the Truth? Albert, Truth is the Word of love, and God is love, and God is insanely friendly. God’s Word is Jesus, and He’s just dying to make friends.”

There is a battle going on for our own hearts and the hearts of everyone around us. The Apostle Paul encourages us to stand against the lies that seek to rob us of the Truth, and the freedom, and abundant riches that come with it.

In Ephesians 6 Paul wrote, “Gird your loins with truth.” In the Greek, the word “gird” is perizonnummi from the words peri (which means “all-around,” “encompassing,” “on every side”) and zonnummi (which means “pull or tighten a belt in order to remove slack so one can move freely”). The Greek word for “loins” is osphys meaning “seat of reproductive or generative power.”

Do you see? Right at the top of Paul’s list about how we stand against all the dark forces that come against us is by letting the Truth—Jesus, and the riches of His relentless love—completely encompass the very most intimate space of who we are on every side. It’s about letting the Truth that God is friendly to all sink deep into our hearts so that we might live in freedom.

The only way we can stand against the lies of this world is by letting the Truth—Jesus—wrap Himself around us at the very core of who we are . . .

God knows in order to be fully protected—to truly live—we must be honest—Truthfull, through the power of His Spirit, and then we need to trust Him—Truth. Only in Him, encompassed by Him do we truly live, and move, and have our being. Only in Him are we set free from the lies: “If the son sets you free, you will be free indeed” (John 8:36).

And Jesus is the Truth . . . the truth about God’s heart towards you.
Just keep looking at Him . . .

*Discussion questions are available here: Discussion Questions “Truth and the Music in Hell”