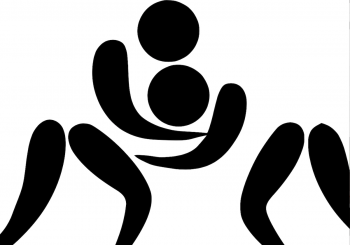 Henry David Thorough wrote, “Most men lead lives of quiet desperation.” In other words, they act like life is easy. They act like life is a happy journey on a cruise ship. They say, “I’m enjoying the cruise,” while all around them… all Hell is breaking loose, and within them, their hearts are paralyzed in fear.

So isn’t it just nice when quiet desperation becomes public desperation and someone says, “Hey, this isn’t a cruise ship! This is a battleship and we’re at war!”?

“We wrestle…” Life isn’t easy; it’s not always a vacation on a cruise ship (Paul admits that) and yet… it’s also not a full-on, nonstop battle either. The word Paul used here, “wrestle”–pale, is a Greek noun, and in all of Scripture, it only appears in this passage.

Markus Barth writes, “The effect of Paul’s (word) choice is an antidote against a tragic-dualistic worldview.” He’s pointing out that the battle between God and Satan is not like a battle between equal opposite forces, and it’s not like the battle is in question. In fact, God has already won in Christ Jesus. In Colossians 2:15 Paul teaches that at the cross, God: “disarmed the rulers and authorities and put them to open shame, triumphing over them in Jesus.” Maybe that’s why Jesus cried, “It is finished,” as He did on the cross.

So, maybe Paul used the word “wrestle” because he wants us to understand that the outcome of the battle doesn’t depend on us; in the midst of our wrestling, there is no burden to win, the battle has already been won. And yet… we do wrestle…

But why? If the battle has already been won, and our wrestling isn’t about us winning a battle, what is the wrestling about—and who are we wrestling anyhow?

Well, let’s look at the next part of the verse: “We wrestle…” “not against flesh and blood…”

Isn’t that interesting? Paul tells us “we wrestle” and then—even before telling us who we wrestle or why we wrestle—he tells us who we do not wrestle: “We wrestle not against flesh and blood” [that’s people]. It seems really important to Paul that the readers of his letter understand that people are not the enemy; we are not to wrestle against people.

Paul wants to make it crystal clear that the enemy is not Pharaoh (who enslaved the Jews) or Pontius Pilot (who ordered the crucifixion of Jesus) or Saul of Tarsus (who persecuted the church). It’s not the Romans or the Jews. It’s not Hitler or the president of an enemy country—or even your own country; it’s not your neighbor who has different political views than you; it’s spiritual forces.

But why is knowledge of who our enemy is and is not so much at the forefront of Paul’s mind? Well, maybe it has to do with the way we wrestle and the reason why we wrestle.

Around the time Paul wrote, “We wrestle…” he also wrote,

“Now I rejoice in what I am suffering for you, and I fill up in my flesh what is still lacking in regard to Christ’s afflictions, for the sake of his body, which is the church. I have become its servant by the commission God gave me to present to you the word of God in its fullness—the mystery that has been kept hidden for ages and generations, but is now disclosed to the Lord’s people. To them, God has chosen to make known among the Gentiles the glorious riches of this mystery, which is Christ in you, the hope of glory.”—Colossians 1:24-27

Paul wrestled by resisting the spiritual forces of evil with a willingness to suffer and sacrifice for the sake of others, for the sake of proclaiming that the hope of glory is Christ in everyone! He was not wrestling for his own comfortability or for his personal rights. He suffered and served in order to present “the mystery that has been kept hidden for ages…” the Word of God in its fullness. This mystery is that those who don’t believe…will believe, that those who weren’t chosen are chosen because they are chosen in Christ Jesus.

So, wrestling isn’t simply that we don’t wrestle against people; it’s also that we wrestle for people, against the accuser and his dominion of darkness. And isn’t that how Jesus defeated the enemy? By fighting for us, not against us? And believe it or not, according to Jesus that willingness to suffer and sacrifice is not a heavy burden! Jesus said, “Take my yoke upon you, and learn from me, for I am gentle and lowly in heart, and you will find rest for your souls. For my yoke is easy, and my burden is light.”—Matthew 11:29-30

I don’t know if you’ve ever noticed this, but God…Jesus…they just don’t seem to be worried about the war. They’re real and honest about the struggle, but I don’t think Jesus is stressed out about the enemy or about your sin.

He’s already defeated the enemy, already forgiven all your sin, and now He’s showing you the victory that He’s already won; now He is just shaping you in His image, teaching you how to wrestle as He wrestled. He is teaching us all how to face our fears and overcome them.

We all deny our fears but God walks us into our fears. And it’s in the place of fear that Christ conquers. It’s on the hill of the skull that God reveals His glory. It’s in the valley of the shadow that God grows faith, the faithfulness of Christ in us.

So, maybe that’s another reason why we wrestle against a “spiritual host of wickedness in the heavenly places”—so that our fears might be transformed into faith.

So, wrestling is about us proclaiming the great news of God’s love, “which is for all people,” and it’ s about God proclaiming that good news to our own hearts in the process. And…it doesn’t stop there!

Scripture also says that God wants us to reveal something to the powers that we wrestle. In Ephesians 3:10-11, Paul told us that it’s through us that God makes His victory in Christ Jesus known to the principalities and powers in the heavenly places. It’s with you, through your life, that He delivers a message to the spiritual hosts of wickedness in the heavenly places.

I think, for all of these reasons, Paul started Ephesians 6:12 by saying, “We wrestle not against flesh and blood.” This idea is paramount in his thinking because if we think we are supposed to wrestle against people, we’ve missed the message of the Gospel; if we think some are chosen and some are not, some are the enemy and some are not, we won’t proclaim the Gospel because we’ll be wrestling against people rather than for people.

So, Love wins! Love wins everywhere and everywhen. Love wins in our hearts and Love wins in the hearts of the people around us. Of course, it does! “God is Love.”

We may confess that with our lips, but God is wrestling it into our hearts!

This devotional was prepared by Kimberly Weynen, Peter Hiett’s assistant. It is a compilation of several devotional thoughts from Kimberly and excerpts from Peter’s sermon titled: “Thanks for Everything and Nothing.” To read, watch or listen to the sermon in its entirety click here: Get Real (and renounce your faith in the devil)

*Discussion questions are available here: Discussion Questions “Get Real (and renounce your faith in the devil) Jesus wins!”