You are a Story Jesus is Telling 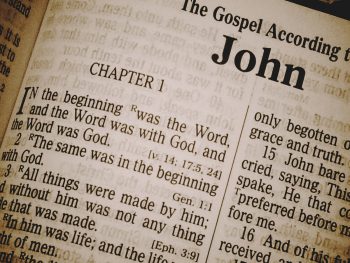 You are a story that Jesus is telling.

Take a moment to dig a little deeper into that reality today!

“All Things are Made Through Him…” and that includes you and your story!

Jesus believed nothing happened to Him by accident and nothing happens to you by accident. Actually, Scripture is clear that you are a story God is telling with Jesus–a story that He is writing with the Word: “In the beginning was the Word and the Word (the logos) was with God and the Word was God. All things (that includes you and your story) were made through him, and without him was not anything made that was made. . . And the Word became flesh and dwelt among us, full of grace and —John 1:1-3 & 14

Jesus seemed to think everything is a metaphor, so you’re living in a parable and the days of your life form a story. God writes that story, and you’re a character in that story. God writes your story. And everybody says, “How nice.” We think that means that God gives us a list of instructions on how to write a good story. If we take that “knowledge of the good” and use it to write our story, we say (with false humility), “Well God wrote the story.” And if we screw up we say, “If only I let God write the story.” “If only…”

In Matthew 16: 5-9 The disciples screw something up, and are probably thinking, “If only…”

When the disciples reached the other side, they had forgotten to bring any bread. Jesus said to them, “Watch and beware of the leaven of the Pharisees and Sadducees.” And they began discussing it among themselves, saying, “We brought no bread.” But Jesus, aware of this, said, “O you of little faith, why are you discussing among yourselves the fact that you have no bread? Do you not yet perceive? Do you not remember the five loaves for the five thousand, and how many baskets you gathered?
Matthew 16:5-9

Do you see? They screwed up and Jesus acts as if God never stopped writing the story. In fact, once Jesus enters the picture, He gives new meaning to all the empty time they’ve spent worrying about bread, and turns that fact into the Gospel . . . of Matthew.

He redeems their time.
They thought, “If only.”
And Jesus acts as if there is actually no “if only.”
Jesus acts as if, in the words of Paul:
“God accomplishes all things according to the counsel of His will.”
God does all things so anything God doesn’t do–isn’t actually done.

Well, they screw up. But God never stopped writing the story. In 2 Corinthians 2: 13, Paul writes that he missed an “open door” because he was worried about Titus. Worry is sin. He screwed up, but then he writes, “Thanks be to God who always leads us in triumph.” God never stopped writing the story almost as if: “where sin increased, grace abounded all the more,” and that’s the story.

Jesus seemed to think that this whole world was the metaphor
And what it meant was truly solid and eternal
Like gold buried in a field
Like a pearl hidden in an oyster
Like the meaning hidden in each day.

If you don’t pay attention, you could live your life – never having truly lived your life. It would be just one empty calendar day after another. But if you seek first the Kingdom and his righteousness, you can live your life eternally having each day filled with meaning, that is “eternal life.”

What are your “If only” statements today?

Where do you feel like you’ve screwed up the story?

Do you believe your story is like gold buried in a field, a pearl hidden in an oyster?

Meditate on this: All things (that includes you and your story) were made through Him, and without Him was not anything made that was made. . . And the Word became flesh and dwelt among us, full of grace and truth.

This devotional was prepared by Peter’s assistant, Kimberly Weynen. It was inspired by the sermon “Jesus Stories and Stories Jesus Told (Living In A Parable)” Click on the sermon title to read, watch or listen to the sermon in its entirety.