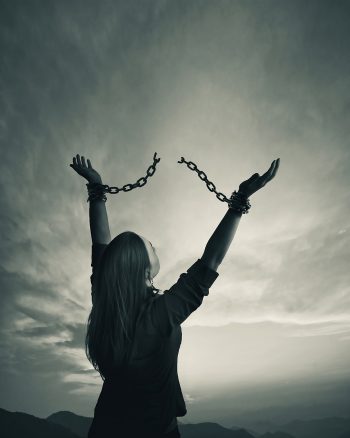 Wayne Rice used to tell a story and I read somewhere that it was true:

Back in the 1800s, a young Englishman traveled to CA in search of gold. After several months of prospecting, he struck it rich. On his way home, he traveled through New Orleans, where he came upon a crowd of people all looking in the same direction. . . . He heard “Sold!” just as he joined the crowd. A middle-aged black man was taken away in chains.

Next, a beautiful young girl was pushed up onto the platform and made to walk around so everyone could see. The bidding began… over the sound of vile jokes and comments that betrayed the wicked intentions of the men in that crowd.

Just before the final call, this young miner—from a land that had outlawed slavery years before—this young miner yelled out a price that was exactly twice the previous bid—an amount that exceeded the worth of any man. The crowd laughed in derision.

The girl walked down the steps of the platform until she was eye-to-eye with the miner. She spat straight in his face and through clenched teeth she said, “I hate you!” . . . The miner, without a word, wiped his face, paid the auctioneer, took the girl by the hand, and walked away from the still-laughing crowd.

He seemed to be looking for something in particular, as they walked up one street and down another. Finally, he stopped in front of some sort of store. The slave girl did not know what type of store it was . . . but she saw the miner argue with the clerk and dump the rest of his gold onto the counter.

She looked away as the miner came out the door. Stretching out his hand, he said to the girl, “Here are your manumission papers. You are free.”

The slave-girl did not look up. He said, “Here. These are papers that say you’re free. Take ‘em..”

The girl looked at the papers, then looked at him. “You just bought me . . . and now, you’re setting me free?”

And then at that, so the story goes, she dropped to her knees weeping… then, clutching his muddy boots, the girl looked up at the miner and said, “All I want to do, all I will to do, is serve you!”

Now I don’t know if that’s a true story, but it would be true if

It would be true if Jesus were the miner, and the slave girl was you, for that’s the way Jesus chooses you, and sets you free, to choose Him too.

This devotional was prepared by Kimberly Weynen, Peter Hiett’s assistant. It’s a compilation of excerpts from a sermon by Peter entitled “The Election (The Beautiful Thing IV)“. To read, watch or listen to the sermon in its entirety click on the sermon title.