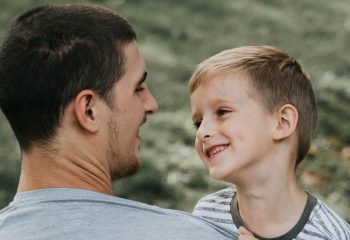 Several years ago, I (Peter) took my kids Elizabeth, John, and Becky out for dinner and to play at the play place at McDonalds. The playland was an absolute zoo. I made the kids take a few bites of their cheeseburgers before they ran off to play. I sat back, drank my coffee, and tried to relax. A few minutes later, my wonderful, sweet, four-year-old daughter Elizabeth came shooting out of a green tube slide. She ran over to me and, trying to catch her breath, she pointed to the massive tube structure and said, “Daddy, Becky’s up there, and she pooped!” I looked at that massive, tube structure full of constantly moving children and said, “Oh, honey, she probably just had gas or something.” Elizabeth said, “Uh…” and pointed at her left foot. There on her sock was irrefutable evidence that someone had pooped.

Just then I picked up a familiar smell. I looked up and could actually see it wafting out of the tubes and across the room. I could see it because, one after another, people got horrified looks on their faces. I went up to get her. I didn’t know exactly where she was, so I began interviewing preschoolers flying out of the tubes. They’d hold their noses and talk about the “poopy girl.” Just then I spotted Becky through a little window. Immediately I scrambled up the tube.

I found Becky standing in this small, red room being counseled by a group of older children who were obviously trying to contain my daughter’s failure. In unison, they all pointed and exclaimed, “She pooped.” I picked up Becky went down the slide and into the restroom to clean her up and then took her home with her siblings. On the way home, in the smelly car, everyone was silent…until one of the children spoke for all. “Daddy?” “Yes?” “I don’t want to go to that McDonald’s anymore.” And I just started laughing. When I got home, I wrote down every detail so I wouldn’t forget.

For at least six months after the incident, from time to time, Becky would get real pensive, then out of the blue she’d look up at me with those big, beautiful eyes and say, “I pooped on the green slide.” And I would say, “Yes, you did, Becky, and I think you’re awesome.” And she’d tell people, “I’m Becky awesome and gorgeous too!” At Sunday School registration they asked for her middle name and she said, “Becky Pretty Pretty Princess Hiett.” That’s what I called her, and I named her.

They tried to name her (with a different name) that day on the slide. So I’d say, “Yes, Becky, you pooped on the green slide, but you are a pretty pretty princess. You are Becky Pretty Pretty Princess Hiett.”

You know? Scripture reveals that God our Father is the one who names all of us: “…I bow my knees before the Father, from whom every family in heaven and on earth is named….” —Ephesians 3:14

Earlier in Ephesians Paul writes, “God will reconcile all things in Christ Jesus,” and here he writes, “God the Father names all families.”

Do you see what Paul is saying? God is the Father of all fathers. And the Father who names all families. So . . .

Well, if God names you, wouldn’t He name you with His Word, who is Jesus?

Paul certainly seems to be saying that we’re all named through Christ Jesus our Lord. And so we’re all children of God. Ephesians 4:5-6: “One Lord, one faith, one baptism, one God and Father of all, who is over all and through all and in all.” So God is Father of all and names all. Yet so many Christians argue He’s not Father of all or namer of all.

Some argue: “He doesn’t name us; we name ourselves.” That is, “we decide who we are. We decide to become His children with our will, with our choice,” and they call that faith. But the problem with that is then I think that my Savior is my faith, which is really my choice. But Scripture reveals that God is Salvation, in a Word Jesus. The name Jesus means “God is Salvation,” and the Father names us with Him.

Some argue: “Of course God names His children and saves His children. But not all are His children because not all will be saved because God doesn’t love His enemies (who also happen to be our enemies) but will, in fact, torture them forever without end.”

Now you might be thinking “Why does it matter? Why don’t you drop it?” Well, it deeply matters because it keeps coming up in the Bible. And when you find yourself lost, covered in your own crap, surrounded by a huge mess and a world of accusers (like Becky was), faith in your Father’s heart is all that matters.

See, if I think that when my Father comes back He’ll accept or reject me based on my choices—my crap—well, I’ll hide my crap and hide myself in darkness and run from His judgment. The last thing I’ll do is look Him in the eye and confess, “Abba, I pooped on the slide.”

And if I think He won’t judge me on my crap—my choices—but instead arbitrarily pick some crappy kids for grace and other crappy kids for endless torment, well, I certainly won’t be able to trust His heart, which is Jesus. In fact, I’ll be so terrified, I’ll just make even more messes.

You know, in the Gospels, at one point, Jesus said to the Pharisees (that is, the Bible study leaders and pastors of the day), “You are of your father the devil.” That’s terrifying, for sure! But does that mean that God is not their Father? Did satan take dust, breathe into it, and make those men? Is satan the father of people? No. Satan is not the father of people. Jesus says that satan is the father of lies. So, it’s almost like each of those Pharisees were not one but two:

A false man and a true man,
A lie and a thing God made,
An outer man and an inner man,
A real man covered in fig leaves or A real woman encased in crap,
A pretty, pretty princess covered in poo,
A new man and an old man,
A spirit man and a flesh man.

In Ephesians 4, Paul tells us to put on the new man and put off the old man—just let that old man go, put him off, and flush him down the toilet if you will. You may think he’s you, but he’s not. That’s the lie. The old man is the product of a lie first told in a garden long, long ago.

“For this reason I bow my knees before the Father, from whom every family in heaven and on earth is named, that according to the riches of his glory he may grant you to be strengthened with power through his Spirit in your inner being, so that Christ may dwell in your hearts through faith….” —Ephesians 3:14-17

In Greek, your “inner being” is your “inner anthropos”; in Hebrew it’s “inner Adam.” Paul’s prayer is for the readers of Ephesians to be “Strengthened with power through God’s Spirit in their inner Adam,” or more literally, “into or toward the inner man.” Paul calls Christ eschatos Adam or ultimate Adam.

Paul seems to be saying that faith in me is Christ in me; that my faith is Christ’s faith taking root in me, the Spirit of the ultimate Adam in me. Paul has already told us in Ephesians 2:8, “You have been saved by grace through faith, and this not of yourselves.” Your faith in God the Father is the Spirit of God the Son given to you. In Galatians 2:20 Paul just says it: “It is no longer I who live but Christ who lives in me, and the life which I now live in the flesh, I live by the faith of the Son of God who loved me and gave himself up for me.”

Christ is my new man, or me in communion with His Spirit is that new man. The new man is God’s creation.

So what’s the old man?
He must be my creation. He is the self that I create by believing a lie.

And what’s the lie?
The lie is that I can make myself in the image of God through the power of my own will—my flesh. The lie is that I can create myself. But all I can create in the power of my own flesh is crap—literally a mess. I mean, I literally eat life and excrete death. Sorry to state the absolutely obvious which we work so hard to hide. But in this fallen world, where my flesh feels only its own sorrow and its own pleasure, I take life (called food) and excrete death, just like I take the fruit of the knowledge of good and evil from the tree. I take life from the tree and only make death.

The problem with my flesh is not its physicality. The problem is that it is self-centered and so cut off from God. It’s the me that I have created or think I have created. It’s the product of a lie told in a garden long, long ago and told every day by the principalities and powers and world rulers of this present darkness.

But although you do take life and excrete death every day, that does not define who you are. You are not your shit. You are God’s man. You are His Pretty Pretty Princess. Man creates a mess, but the mess does not make the man. God, the Father makes the man and names him with His Word—Jesus.

So rather than have Him burn it from you at the end of days, why not surrender it to Him right now? Just look Him in the face, whenever in doubt, and say, “I pooped on the slide. I made a mess.” And He’ll say, “I know, but that’s not who you are. You are my Man. You are my Pretty Pretty Princess.” Believe Him. Don’t believe the lie that you are your sin, for then you’ll run from His presence and hide yourself in outer darkness until that day that Hell is thrown into the Lake of Fire and Divinity, and this old world is flooded with the glory of God.

He’s a good, good Father
It’s who He is.
And you’re loved by Him.
It’s who you are.
With His Word, He creates all things, redeems all things, and names all things. Let Him name you.

Let Him name you.

This devotional was prepared by Kimberly Weynen, Peter Hiett’s assistant. It is a compilation of excerpts from Peter’s message titled “The Successful Christian Life,” and devotional thoughts from Kimberly. To read, watch or listen to the message in its entirety click here: To Know Your Unknowable Name.