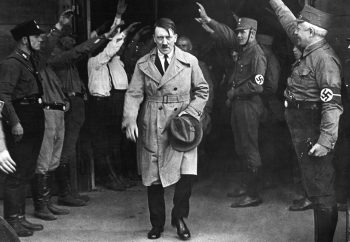 Listen to what one pastor says about Hitler and his eternal destiny: “Can anyone really believe—I mean really even want to believe—that Hitler’s had a second chance, that Pol Pot and Stalin are going to be walking through the Pearly Gates with the rest of us good guys? I don’t think so. Jesus was pretty plain. He spoke clearly to the fact that there are two ways: the broad and the narrow.”

This pastor later goes on to say, “Can anyone even want to believe that Hitler will walk through the Pearly Gates with the rest of us good guys?” Well, who are “the rest of us good guys”? According to Paul, by nature, we’re all children of wrath, and once saved, we have no reason to boast, for we didn’t choose God. God chose us.

Yet, it’s hard for us to accept God’s Judgment of love for all—over our own judgments. We make judgments like, “Hitler was too great of a sinner to ever make it to Heaven.” Our judgments give us the illusion of safety. But maybe anytime I judge people out, I judge their creator out… Maybe whenever I judge others out, I judge myself in…to Hell.

It’s almost like the judgment you pronounce is the judgment you receive. So give Hell, and you’ll get Hell…an isolated, little, dark, lonely kingdom of self, devoid of life because you’ve literally judged the life right out of your kingdom. And you think it’s the end. But it’s not the end. Jesus is the End. Ephesians 4:9 says that Jesus descends even into Hell.

God’s Judgment is different than our judgments. According to Jesus, there are two paths, and EVERYONE takes the wrong path. Only one takes the narrow path, and He—Jesus becomes our path. He is the path, He is the gate, He is the way, the truth, and the life. And He gave His life for ALL, not just some.

Why would anyone want to hope for Hitler? Well, haven’t you noticed? It’s just like Paul wrote: “Where sin increased, grace abounded all the more.” And that’s what makes a great story! Just think of Paul’s story he was transformed by God from the chief of sinners to one of the all-time greatest preachers of God’s grace. Elie Wiesel wrote, “God created man because he loves stories.”

For the apostle Paul, Heaven was communion with people he once sought to exterminate. What a story!

So don’t be afraid to hope for ALL—even for the greatest of sinners—for God is in the business of writing stories far better than we can imagine! And, after all, it’s what He chose you to do, in Christ, from the before the foundation of the world!

God is better than you thought.

The love of Jesus is deeper than you know.

And the Spirit is everywhere working the wonders of Mercy.

This devotional was prepared by Kimberly Weynen, Peter Hiett’s assistant. It is a compilation of devotional thoughts from Kimberly and excerpts from Peter’s sermon titled “Beyond The Wall.” To read, watch or listen to the sermon in its entirety click here: Beyond The Wall